Ricky Hatton reveals he has cut back on his 12 cups of tea-a-day, scrapped going for pints and eaten small meals regularly to pull off incredible 40lb weight loss ahead of his first fight in 10 YEARS in next month’s exhibition with Antonio Barrera

Former world champion Ricky Hatton says he cut out alcoholic ‘treats’ and ate ‘sensible’ meals to lose over two stone in seven weeks as he prepares for his sensational return to the ring.

The 43-year-old is taking part in an exhibition bout against Antonio Barrera at the Manchester Arena in July after being inspired by Mike Tyson and Joy Jones Jr’s fight in November 2020.

Hatton, who hung up his gloves in 2012 after being knocked out by Vyacheslav Senchenko, previously said he would take part in the charity eight-round bout to give himself a ‘reason to get out of bed every single day’.

Hatton started to gain weight following his retirement and admitted to going for ‘pints seven days a week’ before returning to training for his fight next month.

Hatton – who was once known as ‘Ricky Fatton’ for his weight fluctuation – shocked fans when he uploaded a photo outlining his current physique.

Hatton shared a comparison picture that showed himself at his heaviest next to a photo of himself following his cut.

He posted the image with the accompanying caption: ‘Never thought I’d get here again. Well I have. THE BAD DAYS DON’T LAST FOREVER ONLY YOU CAN CHANGE IT AND CHANGE IT YOU CAN. POSITIVE STUFF. EVERYDAY. YOU CAN DO IT. RICKY’. 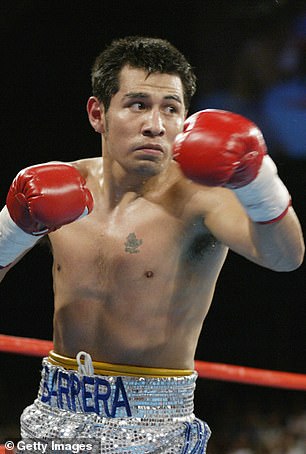 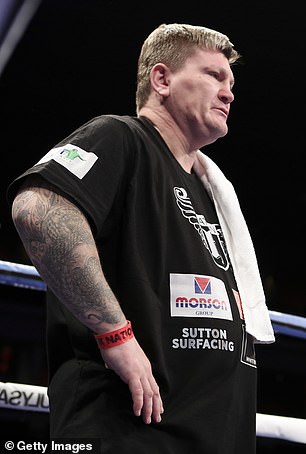 Hatton has gained the pounds since retiring in 2012 but has trimmed down as he prepares to face Mexican Marco Antonio Barrera (right, pictured in 2002) on July 2

Hatton then revealed he cut alcohol and ate ‘small’ meals ‘often’ to lose 40lbs ahead of his return to the ring.

Speaking to British Boxing TV, Hatton said: ‘I like pints of beer, it has been well known, but you can’t do that. I think that is the main thing with the weight.

‘If you go out and have pints seven days a week you won’t be walking around with a six pack. I think it is just sensible, eating the right things small and often and regular workouts.

‘I do two workouts a day so my metabolism is always racing. Cut it down on treats, I have 12 cups of tea a day normally but it has to just be a one-off. 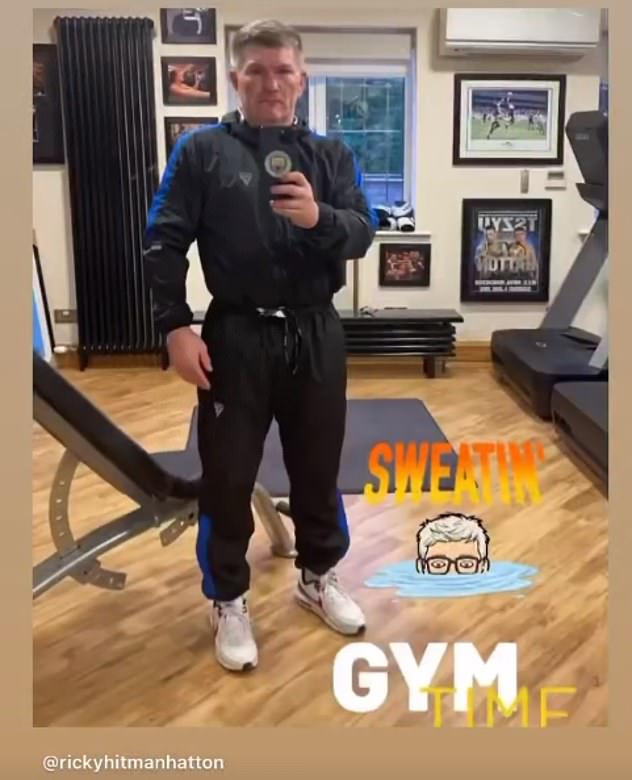 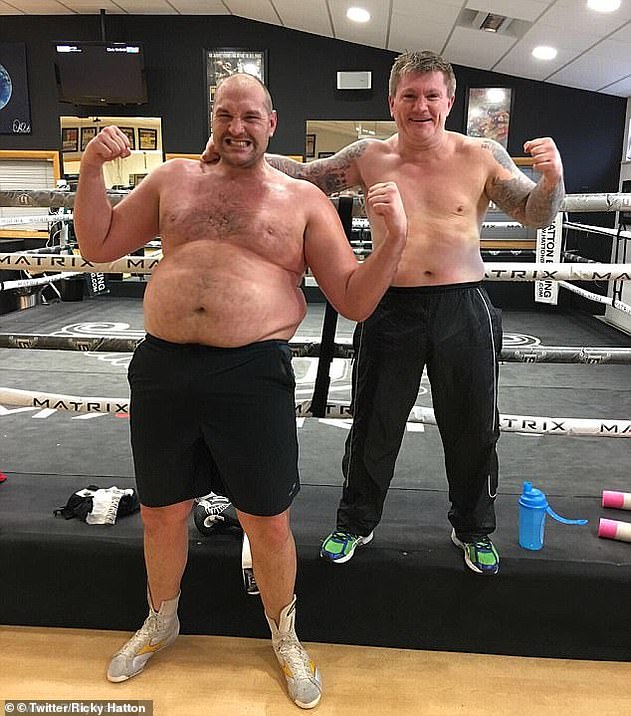 ‘I think the best thing is the willpower, and a nutritionist is only good as the lad that advises him and I think it is all down to your own personal discipline.’

Hatton announced his return to boxing in April of this year, writing on social media: ‘I can confirm my return to the ring.

‘Join me for a huge party night – with top music acts – in Manchester on July 2. #HitmanRises. It’s not how you fall, it’s how you rise…’

Outlining his motivation for returning to the ring, Hatton said: ‘I am doing this for fans who struggled being locked up with Covid.

‘I got a call and was asked if I would come back to do this for the fans who have been locked up for ages during Covid. Covid has been tough for me, for everyone.

‘I want to inspire people who have had mental health problems, too. They can look at me and say ‘He struggled and now look at where he is’ so they can do it too.’ 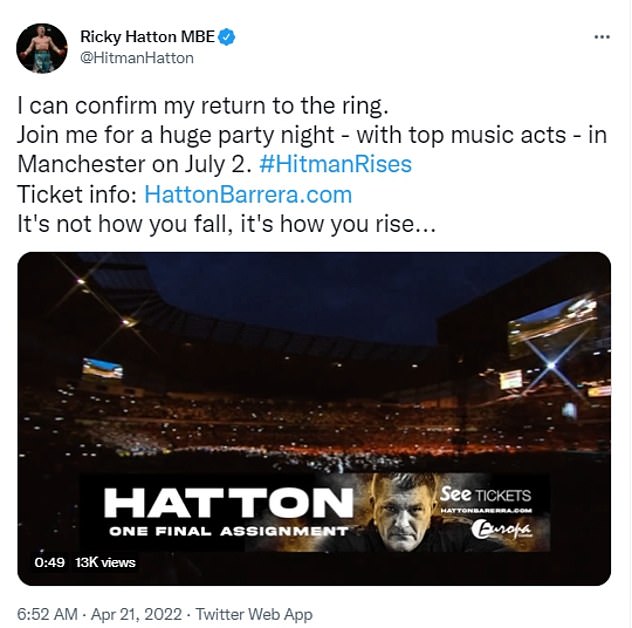 Hatton also confirmed that his desire to return to the ring was sparked as a result of Tyson’s exhibition fight against Jones Jr in November 2020.

At the time of his official retirement, Hatton said: ‘A fighter knows when it’s not there, and it’s not there. I’ve had too many fights and burnt the candles at both ends

‘I’ve lost four and half stone for this and my sparring was great but I’m not going to put myself through that torture again.

‘I got the answers. I was crying in the ring and no doubt I’ll be crying tonight but I’m happy. I had to go in there and find out and I did.

‘I’ve no complaints. It’s been three and a half years and you all know the story. I needed to put a few demons to rest and I said before the fight I felt I’d already won and that hasn’t changed.’

1997 – September 11: Makes professional debut under the guidance of trainer Billy Graham and knocks out Colin McAuley in the first round at Kingsway Leisure Centre in Widnes.

2002 – June 1: Suffers first knockdown of his career in opening round against Eamonn Magee, but battles back to win on points.

2005 – June 4: Shocks the world by beating Kostya Tszyu, considered one of the top pound-for-pound fighters in the world, in Manchester, winning the IBF light-welterweight title.November 26: Overcomes nasty cuts to beat Carlos Maussa and add WBA crown to his IBF title.December 21: Becomes first British fighter to receive the prestigious Ring Magazine ‘Fighter of the Year’ award.

2006 – Moves up to welterweight division and labours to victory against Luis Collazo, claiming the WBA title.

June: Hatton’s team agree terms with the camp of Floyd Mayweather for a December 8 fight in Las Vegas.

December 8: Knocked out in the 10th round by Mayweather in the first defeat of his professional career.

2008 – May 24: Retains IBO light-welterweight title by securing a unanimous points verdict against Juan Lazcano in front of 55,000 supporters at Manchester City’s Eastlands stadium.

July 29: Announces split from long-time trainer Billy Graham.September 3: Announces he will be trained by Floyd Mayweather Snr for his November fight with Paulie Malignaggi.

November 22: Wins light-heavyweight bout with Malignaggi in Las Vegas after the American’s corner retire him in the 11th round.

August 11: Hatton confirms an all-British fight against Amir Khan is ‘a possibility’.

September 13: A spokesman for Hatton confirms the fighter has entered a rehabilitation facility due to ‘severe depression’ and a ‘drink problem’. The announcement follows News of the World allegations of cocaine use by Hatton.

September 23: The British Boxing Board of Control announce they have withdrawn Hatton’s boxer’s licence.

2011 – July 7: Announces his retirement from boxing, more than two years after his defeat to Pacquiao.

2012 – September 14: Confirms at a press conference that he is to return to the ring, with a November 24 bout at the Manchester Arena against an as yet unnamed opponent.

November 24: Stopped in the ninth round by Senchenko. Announces retirement.