Oleksandr Usyk broke character from his typical kooky self to send a very serious warning to Anthony Joshua ahead of fight night. Usyk revealed that he intends to walk into the middle of the ring and look for the stoppage when the pair collide later tonight.

‘The Cat’ will have gained confidence having wobbled ‘AJ’ in the final portions of the twelfth round in their inaugural contest. Joshua appeared to be momentarily dazed after eating a flurry of punches from the Ukrainian in the last fifteen seconds.

Fighting exhaustion, he slumped into the ropes as Usyk unloaded at will, but survived to see the final bell.

“I am going to walk into the middle of the ring and look for the stoppage,” Usyk told Boxing Scene. “Exactly that, that’s the way it is going to be. Frankly, I don’t care much about what he does. It’s up to him to decide what to learn, what to study, how to behave.

“I’m doing my job, I’m not even trying to think about his. This is not the type of information I really require. What I do require is the data from my team, from people we are working on – everything else is not helpful.

“Many people absorb information that is useless, that they have no idea how to use properly in their lives. According to my experience, this is just dirt, c***, that remains in our heads and doesn’t help us to develop. It just stays there and keeps the space.

Joshua vs Usyk live stream: How to watch the fight 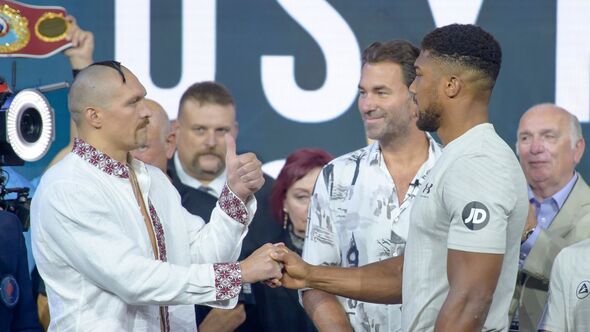 Clearly, Usyk is entirely focused on his own approach and rightly so. The former undisputed cruiserweight champion put on a fine display in their first contest back in September as he snatched the WBA (super), IBF, and WBO heavyweight titles from Joshua in his own back garden.

Now on neutral ground, the pair square off for a second time at the King Abdullah Sport City in Jeddah, Saudi Arabia live on Sky Sports Box Office. Alongside the major world titles which were on the line last time out, the lineal strap (Ring Magazine belt) has been added to the prize pool after Tyson Fury vacated the crown following his recent re-retirement.