An MMA referee was knocked out by an accidental kick to the head, before recovering to officiate the rest of the bout.

Scott Marhardt, who was in charge of a bout during the IMMAF Super Cup semi-final between Mexico and Ireland, was standing at what seemed like a safe range away from the fighters.

But moments later, the Mexican threw a kick known as ‘Rolling Thunder’, which involves essentially a front flip with the intention of landing a heel on the opponent’s head. 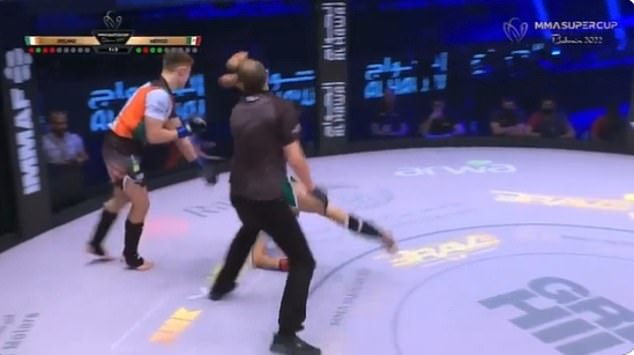 On this occasion the errant heel struck Marhardt on the top of his head and the referee staggered before falling on his back.

His arms rested behind his head, which is usually a strong indication of a loss of consciousness.

It seemed bizarre that neither fighter was remotely concerned about the referee.

According to reports, Marhardt then recovered and was able to officiate the rest of the contest. The Irish fighter went on to win the fight and help book Ireland a place in the final of the team event in Bahrain.

Instances of referees being knocked out in MMA are surprisingly rare, particularly given that they often have to put themselves in harms way to stop a flurry of punches to a defenseless fighter.

The amateur tournament in Bahrain is part of the burgeoning IMMAF circuit where fighters are able to cut their teeth before turning professional.

Conor McCarthy put Ireland in front at 4-3 after a unanimous points win before Denis Perry confirmed Ireland’s spot in the final with a submission.

They will take on hosts Bahrain in the final of the competition. 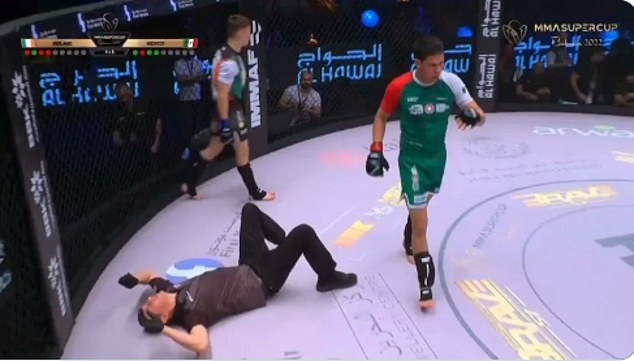 Remarkably, Marhadt then recovered and was able to officiate the rest of the contest