Jake Paul refuses to commit to fighting rival Tommy Fury after prevailing against Tyron Woodley, as he insists he doesn’t know ‘what’s next on the roadmap’

Jake Paul has refused to commit to fighting Tommy Fury after knocking out Tyron Woodley.

Paul produced an impressive performance in his rematch against Woodley in Florida and managed to knock his opponent out in the sixth round.

The fight was a replacement for Paul’s scheduled bout with Tommy Fury, which didn’t take place after the latter pulled out due to injury.

Paul frequently mocked Fury with his outfits during the weigh-in and ahead of the fight.

However, he indicated that he is currently focusing on taking a break rather than the identity of his next opponent.

Speaking at his post-fight press conference, Paul said: ‘I don’t really know what’s next on the roadmap.

‘I’ve done it all, I’ve accomplished what I want to accomplish.

‘I need to take a break, I’ve been going at this non-stop for a year and a half and it’s a lot.

‘I’m exhausted, I need to spend time with my family at Christmas and go on a vacation, I haven’t gone on a vacation since I was 18-years-old.

‘I told myself ‘not until you feel like you’ve got to a place in life where you deserve a vacation’ and I deserve it now. 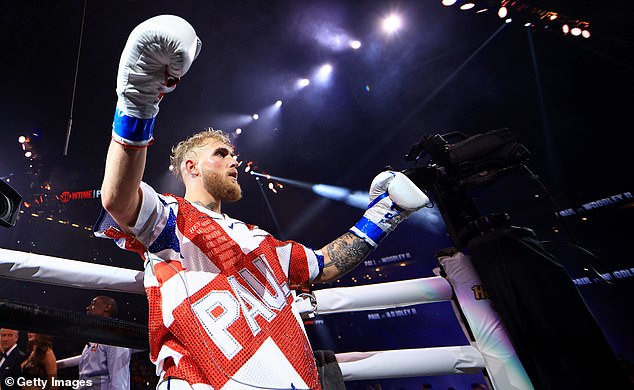 ‘I’m going to go on my first real vacation where there’s no obligations, because I’ve gone on vacations where I have to film it, vlog it, do interviews and wake up at a certain time to work out.

‘I’m going on a real vacation and doing backflips into the water – I’ll come back whenever I feel like it.’

Paul has now won all five of his professional fights and is proud of his record so far.

The 24-year-old stressed that he doesn’t care if his opponent is a professional boxer or a UFC fighter.

Paul continued: ‘I’ve done more than enough, four massive fights in 13 months. Nobody in the history of boxing has done what I’ve done at this age.

‘Massive pay-per-views, knocked out every person that I’ve fought, the only person that’s as active as me is Canelo [Alvarez], and he’s 50+ fights in. 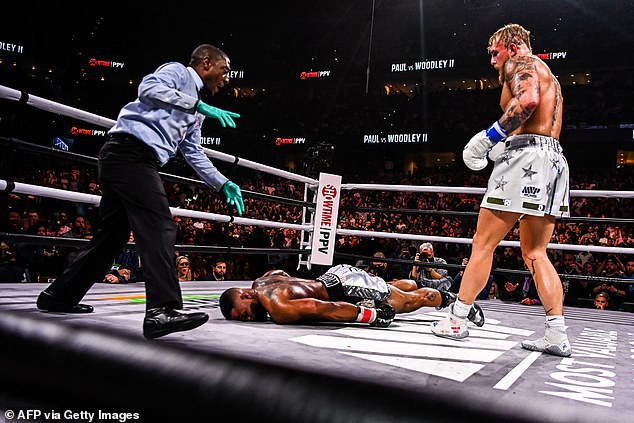 ‘I turned them all into memes, that s*** is going viral all over the internet and I’m ready to fight whoever.

‘It doesn’t matter if they’re a professional boxer or a five-time UFC champion, I don’t care.

‘I’m really built for this and no matter what I’m going to find a way to get the job done and that’s what I showed tonight.’

Paul mocked Fury by wearing a UK-themed ring-walk outfit which included the words: ‘Hey Tommy, wish you could’ve been here but watching from a TV is cool too’.

After the fight Paul continued to criticise Fury, saying: ‘Tommy Fury is lucky that he wasn’t in there tonight, because Tyron’s way tougher and has that experience. Tommy would’ve probably looked a lot worse than that, and that was pretty bad.’