Jake Paul has cancelled his Hasim Rahman Jr next week, accusing his opponent of failing to cut to the agreed weight limit. The YouTuber-turned-boxer claims that Rahman’s assurances about his weight loss were not made in ‘good faith’.

Rahman had stepped in at short notice to fight Paul after former Love Island star Tommy Fury pulled out. Heavyweight Rahman had agreed to cut to the cruiserweight limit of 200lb. He faced strong financial penalties if he failed to do so. But Paul has now called off the fight after Rahman failed to lose any weight having agreed a new limit of 205lb.

The American accused Rahman and Fury of a lack of professionalism and has apologised to all the boxers involved in the event after calling it off.

Paul tweeted to add: “First Tommy [Fury] Fumbled and now Hasim Rahman Crumbled. These boxers are the most difficult people to work with and continually lack professionalism and confidence to fight me. I apologise to all of the other fighters on the card, our partners, our team and the fans.” Quote-tweeting her son’s post, Paul’s mum, Pam Stepnick, succinctly told Rahman: “You’re a pussy.”

A full statement read: “On July 5, Hasim Rahman Jr signed a bout agreement to fight Jake Paul on August 6 at Madison Square Garden at a maximum weight of 200lb. At the time of signing Rahman provided evidence of his weight to give comfort to Most Valuable Promotions and the New York State Athletic Commission that he would not be losing more than 10 per cent of his weight over the four weeks leading up to the fight.

“Since weighing in at 216lb on July 7, Rahman and his camp have offered assurance after assurance publicly and privately that he was on track to make weight at the weigh-in on August 5, going as far as to provide a letter signed by a recognised nutritionist that his weight cut was progressing without issue per New York State Athletic Commission’s required weekly weight checks. In the last 48 hours, it has become clear that these assurances were not made in good faith.

“On Friday, Rahman submitted a weight check to the New York State Athletic Commission that demonstrated he had lost less than one pound since originally signing to take the fight 24 days prior. This prompted the Commission to declare that it would not sanction the fight at less than 205lb. Still, Jake Paul was prepared to move forward with the fight at this new weight and a new contract was sent to Rahman’s promoter reflecting a 205lb. limit, imposing strict penalties should he fail to make weight. 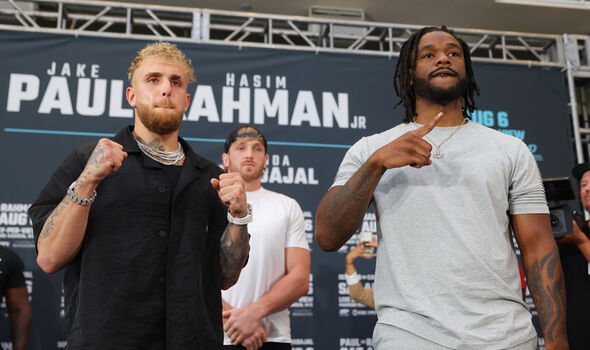 “Upon receiving this new contract Saturday morning, Rahman’s camp indicated for the very first time that he planned to weigh 215lb at the official weigh-in and would not agree to weigh in at 205lb and informing Most Valuable Promotions that they are pulling out of the fight unless the fight was agreed to at 215lb.

“MVP and Jake Paul will not reward someone that has conducted themselves in such a deceiving and calculated manner. Therefore, MVP is left with no choice but to cancel the August 6 event. This forced outcome impacts Jake Paul, Amanda Serrano and every other fighter on this card who have trained tirelessly over the past few months for this event.

“The boxing community must hold Hasim Rahman Jr liable for his lack of professionalism. There has been endless work, time, and money put into building this event and we want to thank our team, Showtime, Madison Square Garden, Holden Boxing and all of our partners for their continued support. Above everything we want to thank our fans for their commitment to the athletes and the sport of boxing.”