The Boogeyman is in the house

We’re currently at the halfway point of the eight-round Wade Ryan-Koen Mazoudier bout.

Not much between them at the moment. Veteran Ryan has the ring moniker “The Boogeyman”. I challenge you to find a better boxing nickname.

When Michael Zerafa pulled out of last year’s clash with Tim Tszyu, it appeared to be professional suicide.

Pay-per-view platforms turned their back on Zerafa and it would appear he blew his biggest chance to get into position to contest for a world title. Worse still, he was one of the most hated athletes in Australian sport.

“For two, three years I was in a dark place because I was getting so much criticism and death threats,” Zerafa told me yesterday after the weigh-in, where his opponent described him as “a loser.”

Michael Zerafa is back on the big stage.Credit:Getty

“I just surrounded myself around my team, my family and my partner, and switched off, and like I said I just focused on the real things in life and what really matters, and if I wouldn’t come to you and ask for your opinion, I don’t really care what you have to say, you know? And that made me grow as an athlete, and as a human, and mentally made me stronger. So getting called a loser was the least of my worries.”

Now he’s back with a chance to trade on that notoriety.

You can always expect a few former footballers to face off on a No Limit promotion and this one is no different. Tonight we’ll run the rule over premiership-winning former Roosters prop Sio Siua Taukeiaho, who will make his debut against former Rabbitohs, Cowboys and Storm forward Jaiman Lowe. There was a period where Taukeiaho was arguably the best front-rower in the NRL and we’ll see if that toughness translates into the ring.

I’ve seen plenty of stare-offs at boxing weigh-ins, but the one between Taukeiaho and Lowe yesterday was one of the best. 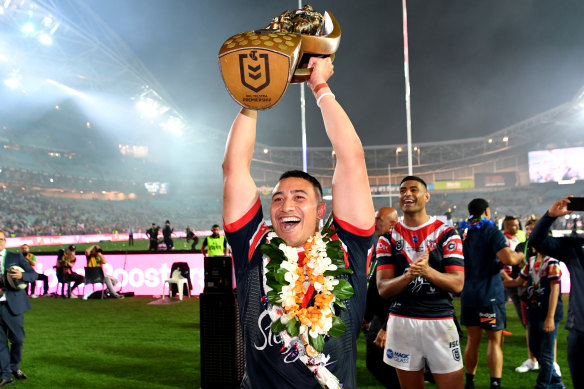 Good evening and a very warm welcome from ringside at the Aware Super Theatre at Darling Harbour.

Tonight marks the end of an extraordinary sporting career when Paul Gallen steps into the ring for the 17th and final time. It seems appropriate that he will do so with the sole aim of belting a Queenslander, in what will be a rematch against former Maroon Justin Hodges.

Gallen has been the headline act for much of his boxing career, but will take a back seat for the main event, a clash between Michael Zerafa and Danilo Creati. 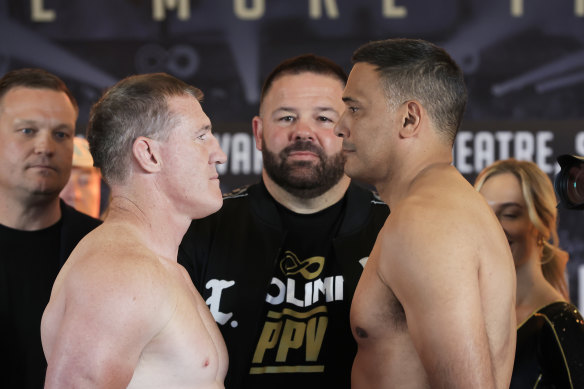 This is a chance for Zerafa to put his controversial withdrawal from last year’s scheduled clash with Tim Tszyu behind him and potentially secure a world title shot against middleweight star Gennady Golovkin.

There’s a stack of other punchy-punchy action to discuss as part of a big night of boxing, so enjoy the ride.