Deontay Wilder doesn’t have the tools to adapt his style of boxing and beat Tyson Fury, according to the Brit’s ex-opponent Otto Wallin. Fury dominated Wilder and stopped him in the seventh round of their clash in February.

Fury arguably won the first clash between the pair back in December 2018 but it was scored a draw.

Most thought Wilder would catch Fury and knock him out in the rematch but the manner in which the Gypsy King attacked shocked fans.

Wilder’s corner threw the towel in during the seventh round after Fury backed the American up into the corner to unload punches.

The rematch was thought to be set for July 18 but it’s been pushed back until October because of the coronavirus pandemic.

But Wallin, who gave Fury a tough fight back in September, doesn’t believe the rematch will be competitive.

“Not so much [I don’t want to see it again]. I want to fight Wilder or Fury…Wilder always has a puncher’s chance but I think it’s going to be very tough for him to come back from that,” he said.

“And even at his age, he’s getting older you know, 34 or something like that. So

“I don’t know. I’m not sure he has the tools to adapt, really.

“I don’t think he looked off to me. If you look at the Luis Ortiz fight, the second fight they had, you could see the signs there.

“Because every time Ortiz would throw something he would land it. And Wilder said he had a good game plan, that he was patient, but I don’t think that’s true. I think Ortiz was better but then Ortiz just got clipped. 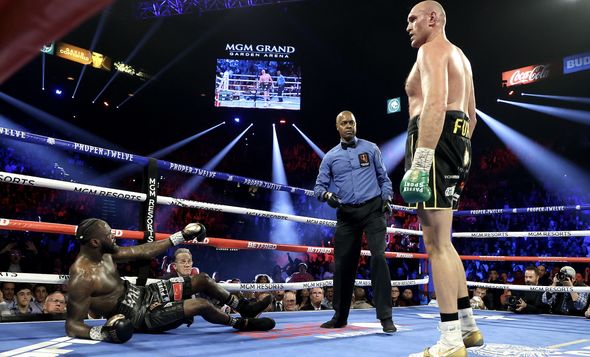 “But Wilder, he has such amazing power so that his strength but also his weakness, that he relies too much on his power and he’s trying to take you out with one shot and that’s hard.

“I just think Fury was better and had a better game plan. ‘Cause there’s a lot of fights that Wilder has been losing them but he’s managed to knock people out.

“I think Fury fought a great fight. I think the training changed proved to be a good move.

“I wasn’t sure about that before the fight but I think they came in with a very good game plan and he said that he was gonna knock him out.

“He usually says that but then he comes out boxing anyways. But this time he just went after him and took him apart.

“So I think it was a great performance by Tyson Fury.”