Conor McGregor was greeted by hundreds of his supporters as he made his way out of an Italian restaurant on Saturday evening.

The Irishman is just one week away fro highly-anticipated rematch with Dustin Poirier.

And  he is jnot quite having the same build up to a fight that he did in his younger years. 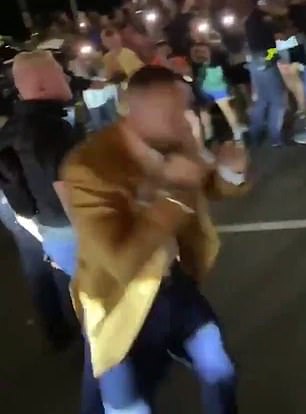 McGregor, 32, and Poirier, also 32, meet for a third time in Las Vegas next weekend as the Irishman bids to avenge his Fight Island defeat to the American, in which he suffered his first defeat by knockout.

The lightweight rivals are split at a win apiece over each other, and McGregor enters the Sin City showdown in need of a win if he is to return to the summit of the 155-pound division.

Two weeks ago, McGregor blasted the Louisianan for landing a takedown in their UFC 257 bout, saying: ‘the first one to shoot is a dusty b****’, referring to Poirier’s successful takedown in January.

Poirier sat down with Stateside media this week to look ahead to the UFC 264 main event and responded to McGregor’s jibe.

‘He just said something, ‘the first one to shoot is a dusty b****’, isn’t he the one that’s always preaching about the flow, the full martial arts, no holds barred, the ultimate fighting,’ Poirier told ESPN.