Conor McGregor has once again been brutally mocked on social media following his UFC 264 defeat by Dustin Poirier.

McGregor broke his leg during the first round of his highly anticipated trilogy fight with the American, but Twitter trolls showed no mercy as they piled in on the Irishman.

A spate of memes quickly appeared, with one depicting him as a pirate while another mocked up an image of his face on Family Guy character Peter Griffin. 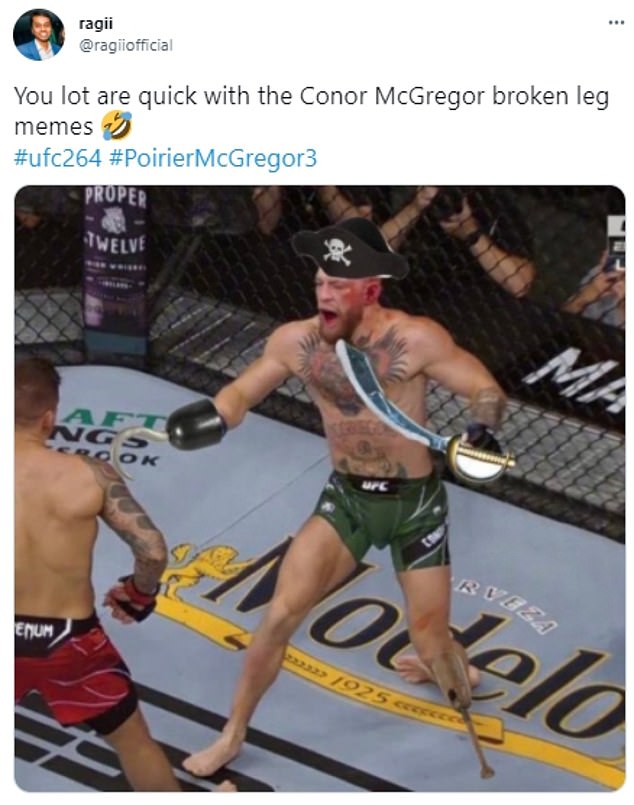 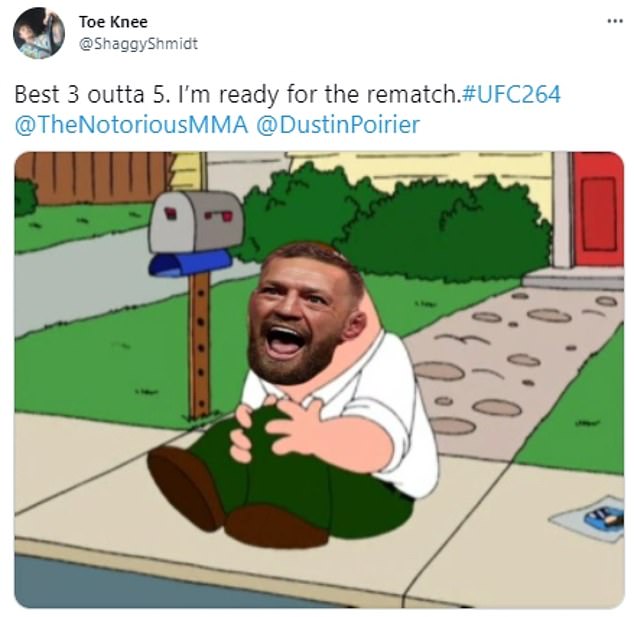 UFC president Dana White confirmed that McGregor fractured his tibia and will undergo surgery on Sunday morning and suggested he was open to fourth fight, while McGregor has inisted he will continue the rivalry.

White said: ‘You can’t have a fight finish that way, so we will see how this thing plays out. Who knows how long Conor will be out. Poirier will do his thing until Conor is ready.’

Following their comments, another meme showed an advert for ‘McGregor vs Poirier 33’, with the two fighters as old men alongisde a tweet which read: ‘Brace yourself for McGregor vs Poirier 4. Dana will keep milking this cow to the end and Dustin collecting easy paychecks.’ 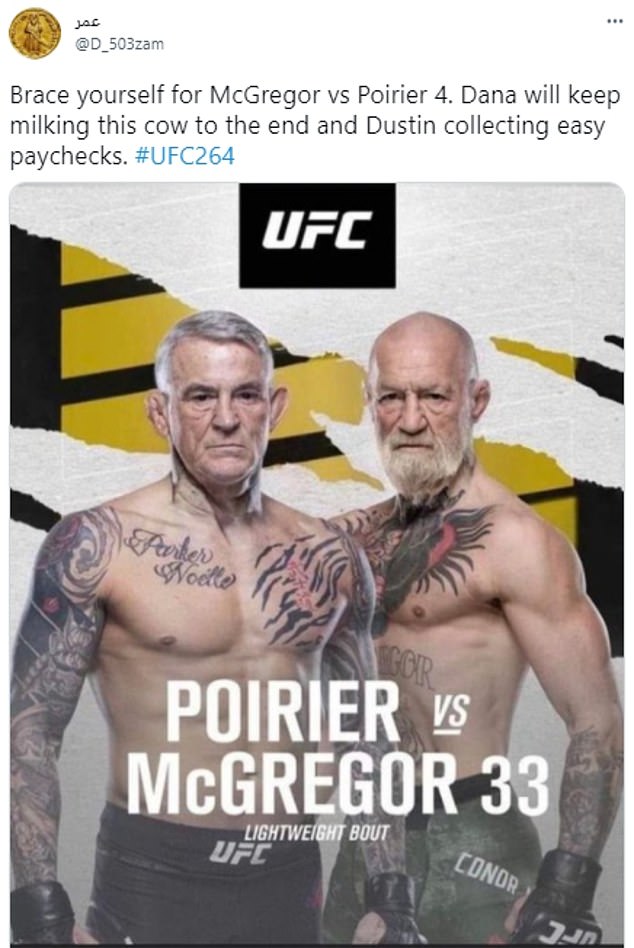 McGregor had vowed to ‘murder’ his rival in a first round knockout victory but he was left in agony after his leg buckled beneath him before the bell.

The Notorious was in no mood to accept defeat as he exchanged terse words with Poirier in the immediate aftermath.

‘I was boxing the bleedin’ head off him. Usual s*** diving to close the distance. This is not over. Your wife is in my DMs. I landed on my wonky leg like Anderson Silva that one time,’ he told Rogan while sat on the Octagon floor.’

The 32-year-old’s post-match comments about Poirier’s wife led to another meme, which showed a cartoon character being carried off on a stretcher, in a similar fashion to how McGregor left the Octogon. 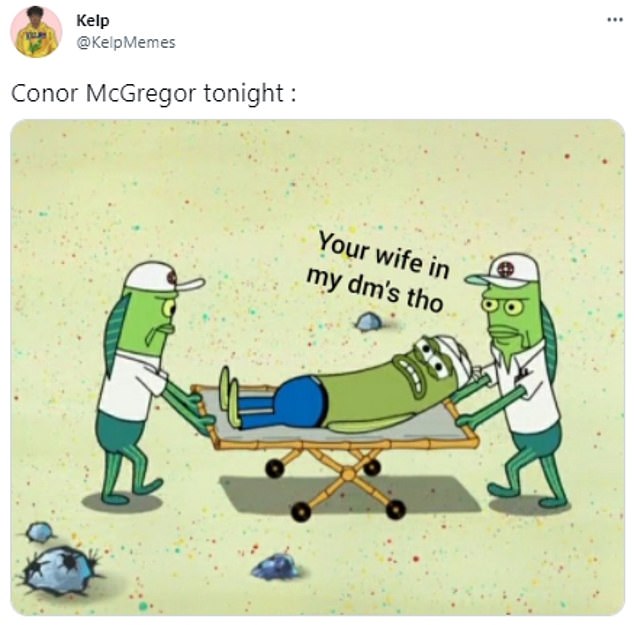 Another twitter user shared the Black Knight meme from the Monty Pyton film with the iconic ‘Tis but a scratch’ line alongside the caption: ‘Conor McGregor after the fight’.

There was another film reference with one person sharing a memorable quote from 2019 Marvel superhero film Avengers: Endgame.

The meme shows Captain America and the line: ‘No I don’t think I will’, with the Twitter user writing: ‘McGregor’s ankle tonight. 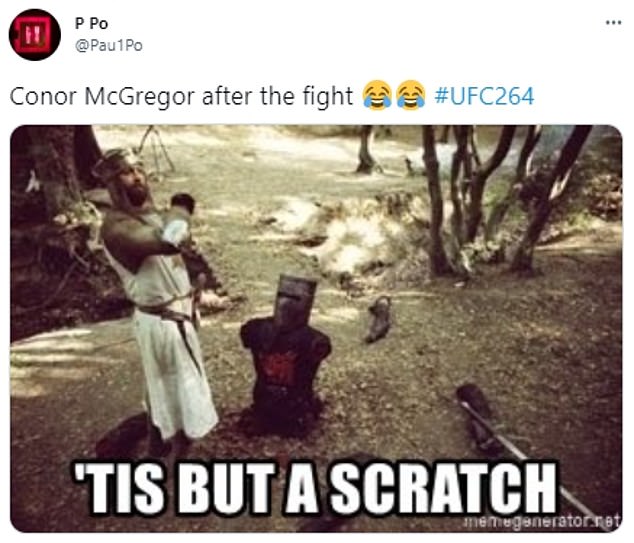 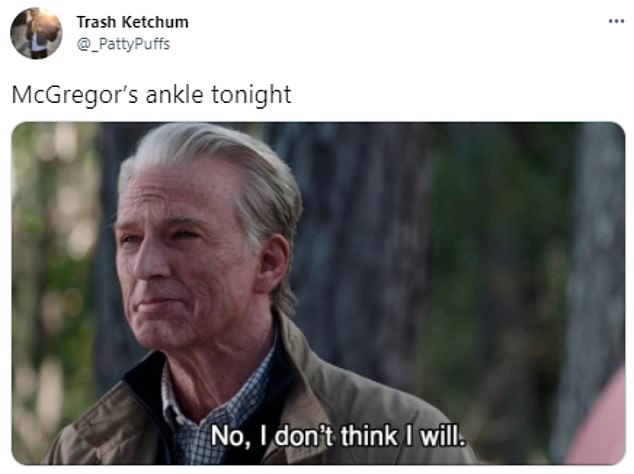 This is not the first time McGregor has been the butt of the joke on social media.

The Irishman was also ridiculed when he was humiliated by Poirier at Fight Island back in January.

McGregor had promised a 60-second triumph and despite looking unusually tense, won the first-round. It all fell apart from there, as the American’s relentless attacks on McGregor’s right leg weakened the favourite.

The Dubliner was dropped two minutes and 32 seconds into the second round, overwhelmed by a hailstorm of punches from Poirier.

The shot of McGregor down on the canvas, curled up against the cage with his swollen face betraying a mixture of shock and pain, instantly became a meme.

One blended the moment Simba tries to wake Mufasa in the Lion King movies with McGregor lying on the deck, with another meme placing a blanket over the fallen champion. 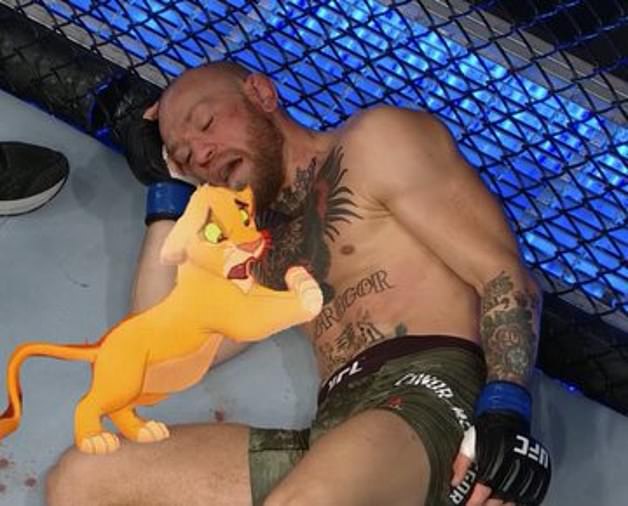