Brock Lesnar has been caught on camera breaking character by sending a secret message to Drew McIntyre on RAW. British superstar McIntyre challenged WWE Champion Lesnar for the world title at WrestleMania 36 after winning the Men’s Royal Rumble Match in January.

Pick up the belt

The two heavyweights are now set to lock horns on April 5 at the Raymond James Stadium in Tampa, Florida.

The two WWE superstars have already started building their feud which reached boiling point last Monday on RAW as McIntyre launched an impressive attack on Lesnar.

The Scottish Terminator took out The Beast with three Claymore kicks, the last two of which took place on the show’s entrance ramp.

After landing the second blow the ex-Intercontinental Champion started yelling at The Conqueror who was pretending like he was unconscious. 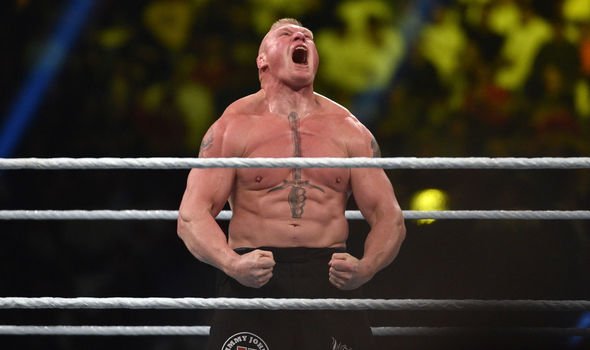 As the crowd was going wild, the camera caught Lesnar breaking character and shouting at his rival to “pick up the belt”.

McIntyre followed the veteran’s advice as he grabbed the WWE Championship and raised it over his head in what could be an indication of what’s to come at WrestleMania.

He then delivered the third and last Claymore which grounded the eight-time world champion in front of the roaring crowd.

Lesnar was obviously trying to make his younger rival look strong ahead of their scheduled fight and was looking to raise interest around their ongoing programme.

This is the second time the British superstar gets the best out of the UFC legend as the two popular stars met during the Men’s Royal Rumble Match.

The ex-NXT Champion eliminated the MMA hero with a thunderous Claymore that saw him flying over the top rope.

Lesnar and McIntyre could compete in the main event of Mania but WWE also announced a couple of other exciting encounters that could close the show in Tampa.

Universal Champion Goldberg will defend his title against Roman Reigns after winning the belt from Bray Wyatt at WWE Super ShowDown, much to the dismay of the WWE fans.

Rhea Ripley will also be putting her NXT Women’s Championship on the line against Women’s Royal Rumble winner Charlotte Flair in a historic match that will see an NXT title being defended for the first time ever at WrestleMania.

John Cena will return to action amid his growing acting career in Hollywood to take on Wyatt at the Show of Shows.

WWE will be announcing some more bouts in the near future with rumours suggesting that wrestling legends like The Undertaker and Edge will come back to battle AJ Styles and Randy Orton respectively.