Billy Joe Saunders will defend his WBO super-middleweight world title tonight at the SSE Arena, Wembley when he takes on Martin Murray. The undefeated Brit, who hails from Welwyn Garden City, is back in action for the first time in over a year, when he beat Marcelo Esteban Coceres in Los Angeles in November 2019.

Saunders was due to take on Canelo Alvarez in May as part of the traditional Cinco de Mayo boxing weekend but that was postponed due to COVID-19.

Now he’ll be looking to dust off the cobwebs against 38-year-old Murray, who is dreaming of an upset after four failed world title attempts.

The pair were meant to go toe-to-toe twice in 2018 but both bouts were cancelled after Saunders picked up injuries.

Now he has vowed to force Murray into retirement, as he eyes the big boys in the division.

“The only one really worthy of taking the fight which was available was Martin Murray. People are looking at this fight as a walk in the park for me and think I should win easily.

“But he’s a four-time world title challenger. In my opinion, he’s a two-time world champion, so it’s not a bad pick out of the bunch.

“I know Martin is coming to fight but I haven’t been beaten on UK soil since I was 12 years old. I’ve got a good track record, and I’m going to keep it that way.

“He’s going to bring a good game, but afterwards he can take his cash back and have a good Christmas and retire with the family, because that’s what I’m planning on doing, retiring him.”

Tonight’s action from Wembley will be shown live on Sky Sports Arena from 7pm.

Sky customers can also watch the action via Sky Go.

The first bout of the evening between Donte Dixon and Angelo Dragon will be shown on the Sky Sports Facebook page from 5:45pm.

If you would like to watch the full card but do not have access to Sky Sports, Now TV offer a day pass for £8.99.

The main event between Saunders and Murray is expected to get underway at around 10pm UK time.

That could of course be subject to change, if the undercard overruns. 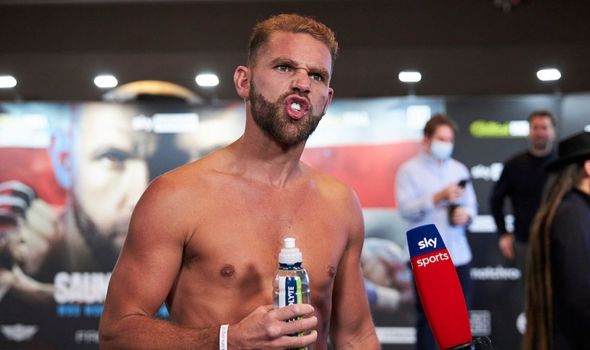