‘I’ve learnt my lesson’: Anthony Joshua insists he has ‘identified his mistakes’ after watching his shock world title defeat by Oleksandr Usyk back… and tells fans not to worry because his ‘spirit is strong’

Anthony Joshua insists he has learnt his lessons from his shock heavyweight title defeat by Oleksandr Usyk.

The 31-year-old lost for the second time in four bouts on Saturday when the Ukranian was awarded a unanimous points decision at Tottenham Hotspur Stadium.

The Brit was visibly hurt by some of the punches from Usyk, and was nearly stopped by a late flurry from his opponent in the final round.

However, Joshua took to social media on Thursday to thank fans for their well wishes, while insisting he has come to terms with the loss.

‘I’ve watched the fight, analysed my preparations & identified my mistakes. I’ve learnt my lesson,’ he wrote on Twitter.

‘Thanks for sending love & checking in. Don’t worry about me. My spirit is strong!’

Joshua has been criticised for the manner of his defeat last weekend, with his own promoter, Eddie Hearn, questioning his tactics in the ring.

‘I don’t know whether it was almost a rebellious thing where it’s like, “No, I’m going to go in there and outbox him”, Hearn told iFL TV.

However, others such as Derek Chisora have defended the former Olympic champion.

The result does blow apart the future plans of those at the top of the heavyweight division. 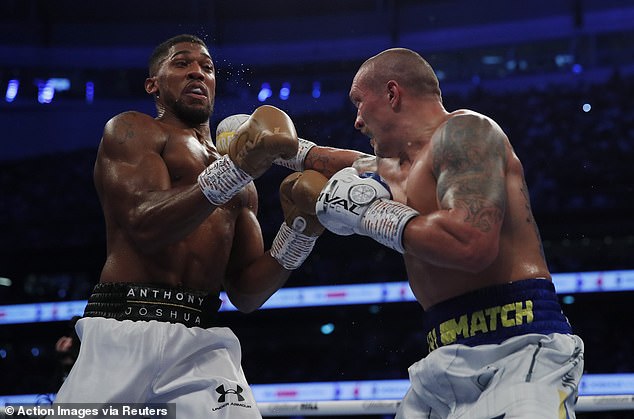 Joshua had been on course for a title unification bout with Tyson Fury, but plans for the mega-money fight have once again been scuppered, much to the annoyance of Fury himself.

‘Usyk did his job well and good luck to him. I’m not saying much about Joshua because I don’t like beating up on people when they’re down,’ he said.