Anthony Joshua called out British heavyweight rival Tyson Fury in 2017 after his brilliant knockout win over Wladimir Klitschko at Wembley Stadium. Joshua added the WBA world title to his IBF belt with the victory against Klitschko.

AJ enjoyed early success in the fight and knocked Klitschko down in the fifth round after a flurry of punches.

But in the sixth, Joshua hit the canvas for the first time in his professional career and had to hang on for a couple of rounds after.

Joshua ended up gaining a second wind, however, and knocked Klitschko down twice more before stopping him on his feet in the 11th round.

JUST IN: Anthony Joshua could fight Tyson Fury next because of coronavirus

And as soon as he grabbed the microphone after having his hand raised by the referee, Joshua focussed his attention on one man.

“I didn’t go into a 12-round slug-fest and struggle to beat Klitschko.

“I come back and I poured my heart out and I got him out of there. That’s what I’m about.

“And Fury! Tyson Fury, where you at? Come on, is that what you want to see? Come on, we’re here man.

“I love fighting, I enjoy fighting, Tyson Fury has been talking a lot and he wants to come back and compete.

“I want to give 90,000 the chance to witness another lovely night of boxing. 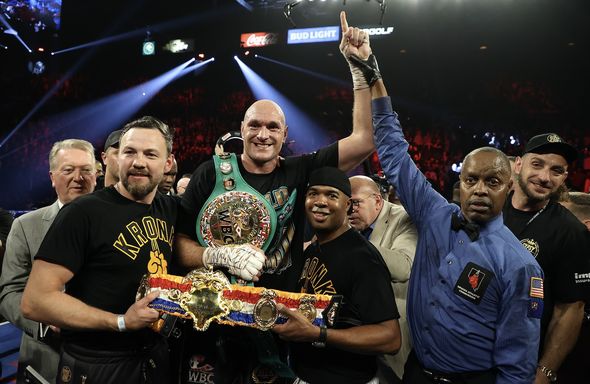 “I just want to fight everyone, I’m really enjoying this right now.”

A Fury fight hasn’t since transpired, but if all goes to plan, the two could be fighting at the end of the year for all the belts.

Joshua went on to win the WBO strap from Joseph Parker a year later while Fury overcame Deontay Wilder last month to win the WBC and Ring Magazine belts.

Fury is set to fight Wilder for a third time in July while Joshua’s next clash – against Kubrat Pulev, could happen in July.

It’s currently scheduled to take place on June 20 at Tottenham Hotspur Stadium, but the ongoing coronavirus pandemic could push it back.