Anthony Joshua admits that Wladimir Klitschko’s power could have had him ‘carried out on a stretcher’. Joshua and Klitschko fought in 2017 and AJ came out on top with an 11th-round TKO win.

Joshua added the WBA world title to his IBF belt with the win over Klitschko, who retired shortly after the fight.

The Olympic gold-medallist came out of the blocks fast and scored a knockdown over Klitschko in the fifth round.

But toward the end of the same round, Joshua began to tire and some heavy Klitschko shots wobbled him.

JUST IN: Dillian Whyte explains how THAT punch against AJ nearly ended career

Joshua then tasted the canvas for the first time in his professional career in the sixth round thanks to a big right hand from Klitschko.

But the Brit recovered and in round 11 he managed to stop Klitschko with a barrage of punches in the corner after knocking him down twice more.

Joshua, however, admits that Klitschko still hits him the hardest, despite having been knocked out by Andy Ruiz Jr.

“Who’s hit me the hardest? Yeah, Klitschko,” he said during a JD Sports Instagram live.

“When I went in with Klitschko, yeah, I just knew this could go two ways.

“I could either win or I’m gonna be laid out on my back. You know when you get carried out on a stretcher? 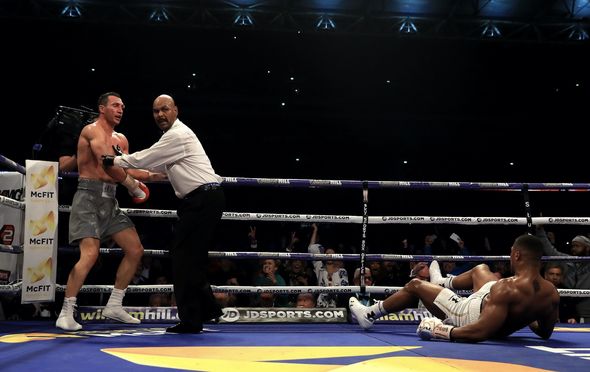 “I was gonna say Ruiz Jr, but when he hit me that was like a concussion on the back of my head.”

He was knocked down four times en route to a seventh-round stoppage loss at Madison Square Garden in New York.

But six months later Joshua won his titles back with a brilliant boxing display in Saudi Arabia.

Joshua was scheduled to face Kubrat Pulev on June 20 but the fight has been postponed because of the coronavirus pandemic.