Amir Khan has warned Conor Benn about the power of Samuel Vargas ‘which can cause any fighter problems’ and says the 24-year-old is taking a ‘massive step-up.’

Benn is risking his unbeaten record against Vargas on Saturday, live on Sky Sports, and Khan knows all about the threat posed by the Colombian, having been floored when they shared the ring in 2018.

Khan sent Vargas to the canvas in the second round, only to be dropped himself, and had to respond with another knockdown during a hard-fought victory in Birmingham.

“He can get in there and have a little tear up,” Khan told Sky Sports. “He can throw a good shot as well. He’s got decent power.

“I think it’s a massive step-up for Conor Benn. I think Conor will have his hands full in that fight. 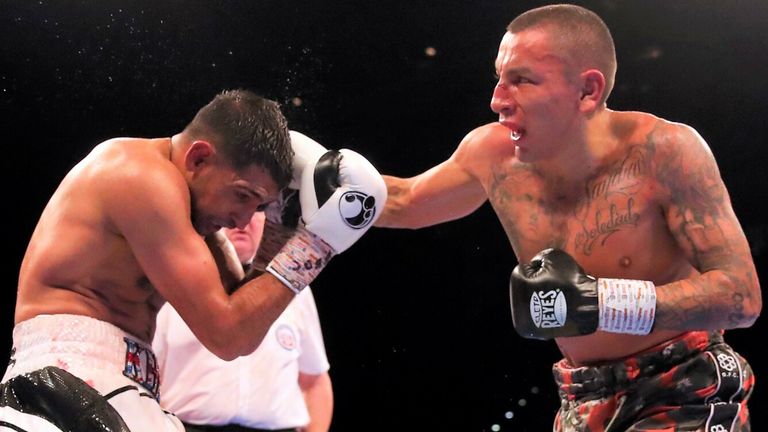 “Since obviously after he fought me, he has been in one or two difficult fights, Samuel Vargas, and he’s been beat after I beat him. But I still think he’s a dangerous operator.

“You have to stay focused throughout the whole fight, because this is boxing, one punch can change a fight.

“Samuel has that power, has decent skills, which can cause any fighter problems.”

Vargas has continued to mix at the top level, only suffering a split decision loss to Luis Collazo, a former world champion, and a stoppage by Vergil Ortiz Jr, one of the hottest prospects in America.

But Khan, a former two-weight king, is backing Benn to emulate him by succeeding at the highest level.

“Yes, he can,” said Khan. “As long as you believe in yourself, you work hard, you train hard.

“You always wake up every morning, knowing that one day, where your end goal is.

“Chase your dreams, chase your goals.”

Benn says he is fully aware of how Vargas inflicted a serious scare on Khan, but has readied himself for a brutal battle.

“It’s going to be one hell of a fight and that’s what I’m preparing for,” said Benn.

“He gave Amir Khan hell. Amir Khan got saved by the bell and by the grace of God three or four times in that fight.

“He had him on the deck. I know Khan’s chin isn’t that credible but he’s a well-respected fighter. He’s achieved everything that I want to achieve in the sport.

“This is going to be a harder fight than people think in my opinion.”

With Kell Brook and Khan nearing the end of their careers, Benn has admitted that he could even pursue a fight against one of the former world champions.

He said: “I’m not overlooking Vargas, but what doors open after him?

“I want a big domestic fight still. Someone that I can take that experience off. The Amir Khans, the Kell Brooks. The Josh Kelly fight is still there if he’s still fighting.

“The Amir Khan fight would be one hell of a fight. That would be a great British clash.

“Amir Khan was a fighter I looked up to and so was Kell Brook. Why not put me in with one of them after Vargas?”

Related posts:
Previous Post: Barcelona chief Joan Laporta picks between Neymar and Erling Haaland transfers
Next Post: From fashions on the field to a winner’s sash: Ware’s win at Stawell