Sonny Bill Williams, by his own admission, used to be a footballer who threw punches. His ambition to become a bona fide boxer, an important distinction, began 11 weeks ago. It’s a journey that has taken him to Europe, where he rubbed shoulders with heavyweight sensations Tyson Fury and Joseph Parker, as part of a plan to dedicate two years of his life to the sport.

How far he has come already will be evident when he steps into the ring against Barry Hall in Turf War, a pay-per-view offering from Stan Event, at Sydney’s Aware Super Theatre on Wednesday.

The man overseeing Williams’ journey is Andy Lee, a former WBO middleweight boxing champion who trains some of the biggest names in the sport.

“I work with Tyson Fury, Joseph Parker and Paddy Donovan, three of the premier boxers in the world,” Lee said. “I wouldn’t be wasting my time with Sonny Bill Williams if I didn’t believe he could do something significant in this sport.”

Which is why Lee predicts fight fans will see a very different version of Williams to the one witnessed in eight professional bouts to date since 2009. The predicted improvement is the result of the time spent together in Europe, highlighted by a series of sparring sessions in Ireland against seasoned professionals including former European cruiserweight champion Tommy McCarthy.

“After a couple of weeks in Ireland, I told him ‘You’re no longer a rugby player trying to box, you’re a boxer who used to play rugby’,” Lee said

“He needed to change that mindset. In Ireland, he was beating all the sparring partners, he didn’t lose one spar, he barely lost a round.

“That’s the evidence for him to believe in himself. There’s no real way of gaining confidence unless you do the work. Those gruelling sparring sessions, going to someone else’s gym and not knowing who you are going to spar, taking them on in a hostile environment and eventually beating them, that’s where the confidence comes from.”

Lee quickly realised Williams had all the tools to be successful; athleticism, the ability to handle pressure, an absolute dedication to the craft and natural punching power.

However, Williams had never fully devoted himself to boxing. When he first entered the ring, against Gary Gurr 13 years ago, he did so out of financial necessity. Training for subsequent fights was squeezed in between his footballing commitments. 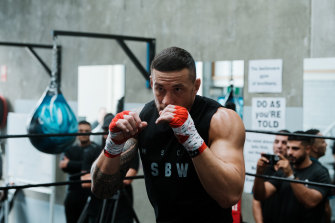 However now, at the age of 36, Williams can fully dedicate himself to the sport without distraction.

“I’ve always been a part-time boxer, but now I’m doing it fulltime I can see the growth,” Williams said.

So how does Williams’ power compare with the other heavyweight stars Lee has worked with?

“He’s as good as any,” Lee replied. “He’s naturally heavy handed, he doesn’t have to try to punch hard. He lets his punches flow and they are very heavy. If knockouts were the result of power, then the strongest man would have the most knockouts. But it’s not the case.

“Knockouts come from technique and timing, hitting someone with a punch they don’t see. That’s what was missing with Sonny, having the technique to go along with his natural ability and power. Now he’s punching right; he’s distributing his weight correctly and leveraging his punches.

“With technique, it’s like a golf swing – everything has to work in sync. Sonny is very quick on the uptake, he’s quite obsessive about it. You show him something today and in the middle of the night he’s texting you and asking questions about a certain move, a certain stance or posture.

“I’ll show him something today and by tomorrow he’s almost perfected it.”

When the Herald and The Age caught up with Lee and Williams on Friday, the former All Black was sporting a shiner suffered in his final sparring session. It’s a reminder that if he drops his guard for a split second, he will get tagged.

“He got me a good one and woke me up a bit,” Williams said of the black eye. “In footy, do you not miss a tackle? Do you not drop the ball?

“I’ve got a black eye, I got punched in the face. That will battle-harden me for Wednesday night.”

The goal, of course, is to not get hit. Williams predicts he will land more often than Hall and emerge victorious. But just as importantly, Lee believes his charge will produce a performance befitting a fighter rather than a footballer.

“The proof in the pudding will be on Wednesday,” he said. “You will see somebody who looks like a seasoned, proper fighter.”

Building a boxer: How Sonny Bill shapes up

This is where the fight will be won. Having won Rugby World Cups and NRL premierships, Williams won’t freeze on the big stage. As the ‘A-side’ in the contest, there will be pressure for Williams to score an emphatic knockout, but the telling blows will only land if he is patient. “Although I played with a flamboyant style [in football], I was always very mindful of doing the one-percenters well,” Williams said. “I understand when it comes to the big dance, the big occasions, the small things get the job done.”

It’s all about the jab. Williams has the power to hurt any heavyweight, but it’s all about setting up first. “I’ve got a world-class jab. I’ve always known that, I need to work off that,” Williams said. It’s something that the former All Black has worked in training camps with Tyson Fury and Joseph Parker.

Renowned trainer and former world champion Andy Lee has worked with Tyson Fury and Joseph Parker. So how does Williams’ power compare? “He’s as good as any,” Lee said. “He’s naturally heavy handed, he doesn’t have to try to punch hard.” Williams has just three stoppages from his eight wins, but believes he can finish off Hall early if he stays patient and waits for his opportunity.

This has been the key to Williams’ success across three sports. ‘SBW’ has an incredible aerobic capacity, the result of good genes and an unmatched work ethic. Given he is nine years younger than Hall, ‘SBW’ is expected to finish stronger the longer the fight goes. “Fighting fitness is completely different [to football], it’s something you have to build up,” Lee said. “Fighting and sparring is about being able to perform and think when you’re tired. That’s something he had to learn.”

Williams retired from football because his knees could no longer take the strain. “Physically, boxing is a lot less torture on the joints, believe it or not,” he said. “It’s not the daily vigorous training of up-and-downs, wrestling, all of that intense NRL stuff.” He made the decision to box after training on his own for two months with no ill effects, impressing Lee with his balance and movement. “It’s crazy how my body has adapted to boxing,” Williams said.