Ronnie O’Sullivan has opened up on painting his nails pink as snooker’s world champion shows his support for Breast Cancer Awareness Month at the English Open. Sporting the brightly coloured nails, O’Sullivan won his first-round match against Brian Ochoiski 4-2 on Monday.

The 44-year-old, who won his sixth world title this summer is wearing the nail paint to raise awareness of breast cancer charity Future Dreams.

And The Rocket has vowed to keep his nails pink for the duration of the tournament – and possibly even longer.

“A friend of mine asked me if I would have a picture done with the nails, and I said ‘forget a picture, I’ll play at the tournament with them’,” O’Sullivan said.

“It’s great to be able to raise awareness for such an important cause.

JUST IN: English Open live stream: How to watch the snooker for free

“I actually really like it – I think it’s going to be here to stay even after Breast Cancer awareness month has gone.”

“It’s really nice, I get why women paint their nails now!’

O’Sullivan called on other men to follow his example and raise awareness of breast cancer.

“I hope other guys show some bottle and do it as well to get the cause some deserved publicity,” he said. “I will have them now while I am still in this event.

“Creating some awareness can only be a positive thing.”

O’Sullivan said he was impressed by his opponent Ochoiski on Monday night – and claimed he had to abandon caution in order to get past the Frenchman.

“Brian played some nice shots and looked like he had a bit of talent,” he said. 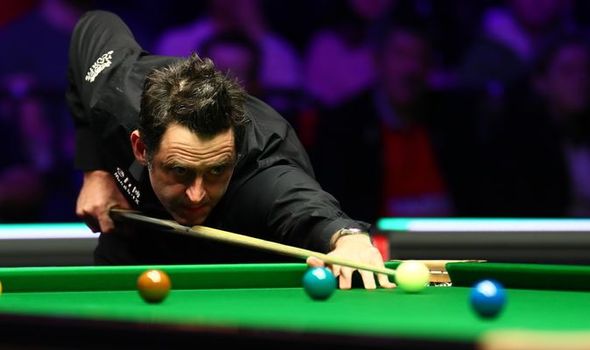 “I was playing the right shots and getting punished, so I started smashing them about and they went in.”

Competitors in the English Open are playing for a £70,000 first prize – but O’Sullivan ultimately has bigger prizes in mind.

“These tournaments are okay, he said.

“The prize money is bigger in China and you probably have to win three of these to one over there. But this is good match practice.”