The NBA took the decision to postpone the Oklahoma City Thunder’s Wednesday night match against the Utah Jazz. The decision came after Rudy Gobert reportedly tested positive for coronavirus.

Players had been preparing for the game to begin before the decision was taken by the league to postpone the game.

Gobert and Emmanuel Mudiay had both been ruled out of the game due to illness, and it is believed that the status of the two Jazz players is what led to the postponement.

Later, after the game had been postponed, The Athletic reported that Gobert had tested positive for Covid-19 [coronavirus].

ESPN’s NBA insider Royce Young told Sportscenter that the game was set to start before the Thunder’s chief medical doctor came out onto court to talk to the referees. 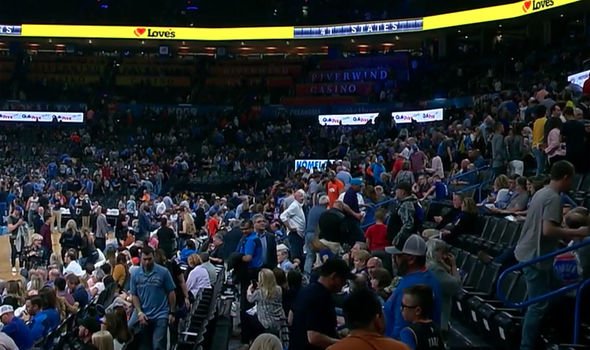 “Literally seconds before tip-off, the refs had the ball in their hands, all ten players were out on the court,” he said.

“The Thunder’s head medical doctor came sprinting out from the tunnel and got all three referees together. He told them something. They had a conference right there on the court for a matter of minutes. They then called both head coaches over and talked to them, some players came over asking what’s going on, everybody was wondering what’s going on.

“Then they told all the players to go back to the locker rooms, and the players were waving at the fans as they went – it was kind of apparent at that moment that the game might have been called. The Thunder’s PA announcer said they were waiting on confirmation from the league to start the game.

“The belief is that it is related to the illnesses of the players. The league couldn’t confirm whether to start the game because of that.”

The NBA has been in discussions over what action will be taken to combat the spread of the virus.

Originally, it had been suggested that a potential avenue was for the league to hold games away from highly-contaminated states – meaning games would be played in lowly-populated areas.

However, it now appears that games will instead be played in closed arenas.

The NBA is set to meet again on Thursday to formally discuss options and put a contingency plan in place.

The NCAA will also hold all men’s and women’s college basketball tournaments without fans.

NCAA president Mark Emmert confirmed that the decision had been made in order to allow the championships to continue.

“While I understand how disappointing this is for all fans of our sports, my decision is based on the current understanding of how COVID-19 is progressing in the United States,” he said.

“This decision is in the best interest of public health, including that of coaches, administrators, fans and, most importantly, our student-athletes. We recognize the opportunity to compete in an NCAA national championship is an experience of a lifetime for the students and their families.

“Today, we will move forward and conduct championships consistent with the current information and will continue to monitor and make adjustments as needed.”