There are cameras and microphones everywhere at the NBA Finals, and they happened to catch an interaction late in Game 2 that was going viral before the game was even over.

It was Phoenix coach Monty Williams, talking only to Suns center Deandre Ayton during a time out and trying desperately to cheer him up on what was a slow night statistically against the Milwaukee Bucks. Ayton’s head was down. His body language was awful. Williams wasn’t having it. He started talking, then grabbed Ayton’s wrist to further commandeer his attention.

Mind you, his voice was raised high enough only so Ayton could hear him over the din of the crowd. No yelling, no screaming, no swearing, no histrionics.

Ayton scored shortly after that time out ended. A few seconds after that, he got a steal. A couple of minutes later, with Milwaukee within six and still having hope, Ayton found Chris Paul for a 3-pointer. The Bucks were never within two possessions of tying the game again.

“I didn’t play the way I wanted to play,” Ayton said. “Especially trying to finish around the rim. I didn’t rebound the way I wanted to rebound. It kind of got to me a little bit but you know, I kept playing through it and kept chipping down to find what I can do best for my team and, you know, Monty seen it on me.

“I had my emotions on my shoulders a little bit, but you know, he stopped me because he knows me, and he’s just wanted to tell me a word of encouragement and it got me going.”

That moment was indicative of the entire season.

Williams has pushed the right button, every time.

He did it again on Thursday night, part of the reason why the Suns are up 2-0 in these NBA Finals. Why they are two wins away from the franchise’s first title, and why Williams was recognised by his peers as the best coach in the league this season. It’s also why many others are starting to catch on that he’s very much the real deal.

“You are giving me a lot of credit,” Williams said. “I try to be authentic. Sometimes in a huddle I don’t say anything. The guys will run the huddle. But I try to be an encourager in huddles, especially when I see a guy down or the team is not at the level where they should be mentally. I don’t want to make up stuff.

“I know what it’s like to be in those huddles and you want to know the truth, but you also need sometimes a pep talk, sometimes encouragement. I just try to be authentic and speak from the heart.” 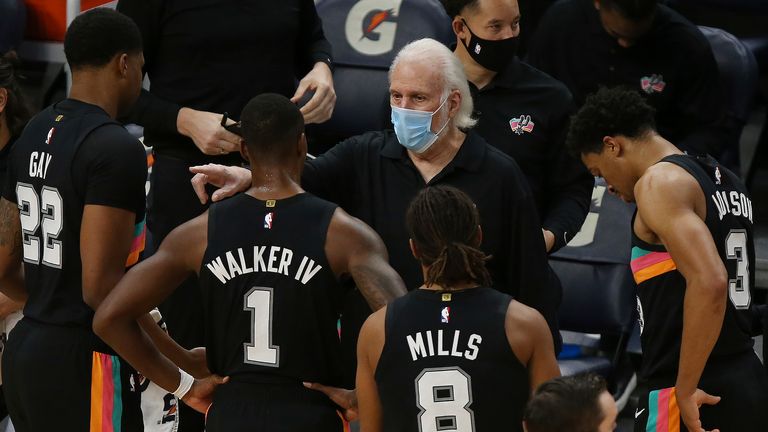 Williams didn’t get here by accident. He played for Pat Riley, Don Nelson and Larry Brown – all members of the Basketball Hall of Fame. He played for Doc Rivers and Mike D’Antoni, too. He played for Gregg Popovich, then worked for Popovich as a coaching intern, then worked with him as San Antonio’s vice president of basketball operations.

Popovich said he knew right away that Williams was unique.

“He’s obviously a fine basketball coach,” Popovich said this week in Las Vegas, where he and his US Olympic team are getting ready for the Tokyo Games. “But his ability to relate to players, to be genuine, to be honest, no tricks, no smoke screens, just a straight-up, caring, loving man, it shows. It comes out, and players react to it.” Popovich is looking to lead the Americans to a gold medal, which would be their fourth Olympic title in a row. Williams was an assistant coach on the most recent US team, the one that won gold in Rio de Janeiro five years ago – doing so just six months after Williams’ wife Ingrid was killed in a car crash.

He delivered his wife’s eulogy, quoting scripture, speaking of his faith in God, even reminding fellow mourners that the family of the other driver, who died in the crash, also needed prayers. It was a show of remarkable class, courage and strength.

A special coach, too.

The Suns were the worst team in basketball over the last five seasons. The worst. They are two wins away from becoming the best team in the world, with a dynamic young duo – Ayton and US Olympian Devin Booker – and a coach on the floor in Chris Paul, whose 16-season wait for an NBA title might be a few days from finally ending.

They do the work and Williams wants them to get all the credit. And yes, they deserve plenty, but it was Williams who came up with the framework for how this team could win – and let his players figure out how best to thrive.

“I tell our guys to go hoop,” Williams shrugs.

He makes it sound simple, makes it look easy. Only the great ones can do that.