When asked why he would make such a deal amid so much uncertainty, Smith simply answered: Why not?

The Sydney Uni Flames and Sydney Kings will likely play double-headers next season.Credit:Getty

"I just thought let's get it done … we've been working on this for a long time," he said. "It's been a process of communication and understanding objectives."

Prior to the purchase, the Flames had been owned and managed for the past 17 years by Sydney Uni Sport and Fitness.

The club will continue to train and operate out of Sydney University, with the hope that a majority of home games will be played as double-headers with the Kings at Qudos Bank Arena.

"I can see a grand final game at Qudos Bank Arena for the Flames with a full house," Smith said. "Why can't it be as big as [that]? If we don't put women's basketball in Sydney on a platform, to allow it to be what it can be, then shame on us. That's my commitment." 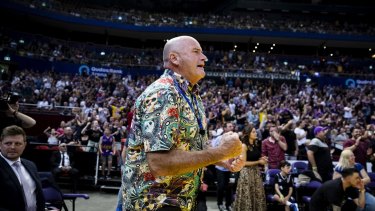 "We got so many unknowns as we go forward right now," Smith said. "One thing that isn't is presenting a gender balance."

The Flames will now be owned and operated by Smith's company Total Sport and Entertainment. Smith also said the purchase could not have been made without the success of the Kings throughout this NBL season.

"We are coming off the back of a hugely successful season for the Sydney Kings which saw growth across all areas of the business – in membership, crowd attendance, ticket sales – and we’re excited to expand on that," Smith said.

Lauren Jackson, Head of Women’s Basketball at Basketball Australia said the purchase was "very" exciting for the growth of the sport.

"What Paul Smith and his team have been able to do in Sydney with the Kings has been incredible and we look forward to what his vision and leadership will bring to the Flames and to the overall standard of the WNBL," Jackson said.

The basketball landscape in Australia is in flux. Perth were handed the 2019-20 NBL championship last week and Smith sensationally claimed both NBL owner Larry Kestelman and the Wildcats reneged on a handshake agreement by awarding the championship to the Wildcats. The NBL's best of five final series was cut short to just three games, with the Wildcats leading 2-1.