Southside Flyers star Bec Cole says her side is refreshed and ready to chase a championship when the WNBL grand final series tips off at Dandenong Stadium on Sunday.

The Flyers have transformed this season, taking over the Dandenong Rangers licence and putting together a team which has topped the league and now has reigning champions Canberra Capitals as the last obstacle to the title.

Bec Cole (left) says Southside have plenty of belief in themselves heading into the WNBL grand final.Credit:Getty Images

The Flyers have been boosted by the surprise return of captain and Australian Opals star Jenna O'Hea who broke her wrist six weeks ago, but this week received clearance from her surgeon two weeks earlier than expected.

While the Flyers managed to beat Adelaide Lightning in two hard-fought semi-final games, the Capitals were pushed to the limit by the Melbourne Boomers and needed to win a deciding game three in Canberra on Wednesday.

Cole starred with the Rangers last season and remained with the franchise after it was taken over by Gerry Ryan and his family who were long-time sponsors of the club.

She said the Flyers had a strong belief in themselves as they prepared to chase the two wins needed to claim the championship.

"We all have so much faith in one another, I'm not nervous, just super excited," Cole said.

"The team has been so laid back and positive. The last couple of weeks is just proof in the pudding that this new club is something to look out for in the years to come as we expand."

O'Hea was a pivotal part of the side until her injury and she was voted into the WNBL’s All-Star five on the strength of her season. 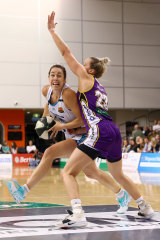 Jenna O’Hea will boost Southside after an early return from a broken wrist.Credit:Getty Images

Without her, the Flyers were soundly beaten by the Capitals a few weeks back but Cole said her side had gained confidence and O'Hea would give them another dimension.

"You learn from every terrible game and that's not one we want to remember but it wasn’t long as we lost Jenna and we've since found our groove without our captain," Cole said.

“But the great thing is we have her back. She adds some extra physicality, experience and height for us. After her first training session she has been great so I'm looking forward to what she has to bring."

But Cole said her side felt they had the same firepower and the match-up would be an fierce one.

"They know how to win," Cole said. "They have experience but when you mention their big names, I want to say we have Leilani Mitchell, we have Mercedes Russell, we have Jenna O'Hea and that's what makes this series so exciting.

"Anyone on our team can step up when required and we are going to play as a team and get it done."

While the Flyers still play at Dandenong Stadium, the club is now a stand-alone entity and that focus is helping them grow and slowly add new supporters.

Adding the likes of O'Hea, Mitchell and Russell, who won this season's defensive player of the year, have made all the difference on court while coach Cheryl Chambers, general manager Tracey Browning and the Ryan family have played big roles off the court.

"It's been a crazy turnaround," Cole said. "Dandenong did a great job, they were part of WNBL history and done great things but for any club in the WNBL, becoming stand-alone entities is where the league clubs need to go.

"We need that to be able to go with the AFLW and Super Netball clubs. It was sad to lose Dandenong but as the Flyers we can get more people involved and you need to be in this form to keep growing."

Players to watch
Southside
Leilani Mitchell – Opals point guard and stellar playmaker, also dangerous from outside.
Jenna O'Hea – Back from injury, plays both inside and out and a key organiser.
Mercedes Russell – WNBA centre, will be pivotal in the paint and as a rebounder.

Canberra
Kelsey Griffin – two-time grand final MVP, always steps up to score and rebound.
Kia Nurse – WNBA star and world class shooter, deadly from outside.
Marianna Tolo – Opals centre who has lifted her scoring and will look to slow Russell.