A dominant Andrew Bogut performance and the red hot hand of Kevin Lisch weren't enough to stop Bryce Cotton and the Wildcats as they snatched home court advantage from the Kings in the NBL grand final series.

Bogut (18 points, 12 rebounds, three assists) and Lisch (17 points on four of six from three point range) kept the Kings in the fight at Qudos Bank Arena but in the end, they were no match for Cotton and Perth, who emerged with a thrilling 88-86 win.

Bryce Cotton (right) starred for the Wildcats on their smash-and-grab mission to Sydney for the NBL grand final series opener.Credit:AAP

Cotton dropped 32 points, picked up six rebounds and dished four assists in a masterful performance that has now given Perth home court advantage in the five-game series.

Cotton did his damage in the second and fourth quarters. Casper Ware – who was scoreless through three quarters and finished with just four points from 13 shots from the field – simply could not stop the Perth star.

Kings coach Will Weaver only played Bogut sparingly in the lead up to the Kings' play-off push and that call came up big in the first game of the grand final.

The star big man picked up 14 of his 18 points in the first half, when Sydney desperately needed them.

The Kings needed Bogut's points production because Cotton was a man on a mission.

Perth trailed by as many as nine points – at 41-32 – in the second quarter. Cotton almost single-handedly erased that lead. He was unstoppable.

Wildcats coach Trevor Gleeson kept running Cotton off screens and he wiggled his way to the rim whenever he pleased, racking up 18 points to put Perth in front 52-49 at the break.

Cotton's efficient scoring was in stark contrast to Ware, who could not buy a bucket.

The star guard missed all five of his first half shots. By three-quarter time, he had missed all eight of his shots and had a duck egg next to his name on the score sheet. 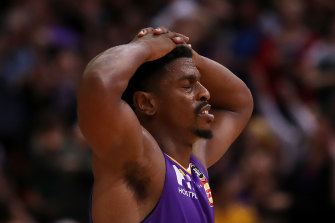 Casper Ware had an off night for the Kings.Credit:Getty

Ironic applause broke out at Qudos Bank Arena when Ware finally broke his drought in the fourth quarter but his lack of production on the offensive end will be no laughing matter for coach Weaver.

As Cotton cooled down when play resumed in the third quarter, Lisch heated right up.

The Boomers guard drained a treble of three-pointers and drew a foul on another three point attempt to take his third quarter tally to 12 points.

They entered the final term with that lead poised at 73-68.

After a slow third quarter, Cotton was back at his unstoppable best when the Wildcats needed him most.

He drained a clutch step-back three pointer to give Perth their first lead of the quarter at 81-79 with just under five to play and never looked back.

Sydney had their chances – including a wide open Shaun Bruce three-pointer which would have put the Kings in front with less than 20 seconds to play and a contested Ware three with two to play – but they could not find the go-ahead bucket they required.

The loss makes the Kings' push for their first NBL championship in 15 years that much harder.

If the Wildcats can take care of business back in Perth on Friday night, they will need to win three consecutive games to be crowned champions.

Perth now just have to win their two home games to claim back-to-back championships. If they do win both home games, it would be their fourth title in the last five years.