In what has been an excellent swearing Games for Australia, Boomers big man Jock Landale was best able to sum up the challenge of keeping the USA in check over the course of 40 minutes of Olympic basketball.

“Defensively, trying to keep them in front is a tough gig. Once they’re out and running in transition, it’s f–king hard,” Landale said. “We started turning the ball over and when these guys are living in transition, its pretty hard to win a basketball game.”

The dream of gold is over for the Boomers, who lost 97-78 to the USA in the semi-finals on Thursday after leading by 15 points midway through the second quarter. With Kevin Durant (23 pts, 9 reb, 2 stl) putting his nation on his back once more, the USA closed the gap to just three by half-time as they embarked on a 20-0 run.

By the time Landale found a basket in the third quarter, the Boomers had failed to score for almost eight minutes, while Jrue Holiday (11 pts, 8 reb, 8 ast) was becoming a major issue for the Australians with his defensive smarts and distribution.

The result wasn’t exactly unpredictable but the disappointment, bordering on despair, on the face of Boomers fixtures Patty Mills, Joe Ingles and Matthew Dellavedova was plain to see as they walked past reporters after the match.

That trio have been so invested in this team and wanted more than anything to slay the giant and progress to the gold medal game on Saturday, where the first medal of any colour for Australia’s mens program was guaranteed. Now they roll the dice for bronze yet again, with France or the Luka Doncic-powered Slovenia their prospective opponents. 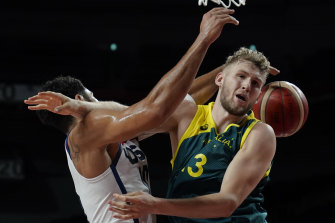 The Boomers are now 0-11 in games where they could have clinched a medal at either the World Cup or Olympics.

If heads were tilted a little low immediately after the final buzzer, Boomers coach Brian Goorjian was making sure the gloom had lifted by the time they were out of the locker room. He strode into the press conference and spelled out what needed to happen next.

“It’s as important as anything, all of us as players, coaches, staff, have ever been involved in. When I walked out of that locker room, the message is loud and clear; back straight, head back, walk out of here proud, proud of what you do, proud of who you are.

“We’ve got something right now in front of us. It has never happened in this country and let’s get excited about that. And I feel like my team’s feeling real good about themselves, proud of what they’ve put on display to this point and we’re very honoured and we’re very excited to be involved in a game coming ahead that could be a country’s first.”

Much will rest on the old heads of the Boomers to ensure the mood is right for the bronze play-off, although newer faces like Landale have a role to play as well. The newly signed San Antonio Spur doesn’t carry any of the baggage from Rio and said he would make sure the group completed a full reset.

“Be men about it. Move on. Don’t let there be a hangover. Guys are going to be disappointed because we came here to win gold but at the end of the day, we came here to make history for our country and win a bronze medal. It would be selfish for us to carry this over into the next game,” Landale said.

“There will be some guys hurting right now but it’s our job to pick them up and remind them we have a game in 48 hours time. We can f–king make history. That’s where our heads are at.”

Goorjian may need to tweak his rotations regardless of who they face next. After just three points on 1-5 shooting against Argentina, Dellavedova couldn’t contribute on the scoreboard at all against the USA.

And Mills had his struggles offensively as well, missing some layups he would normally make blindfolded and finishing with 15 points (5/14, eight assists) in front of his great mentor and USA coach Gregg Popovich, who couldn’t help but feel for the Brooklyn-bound guard with whom he has become so close. 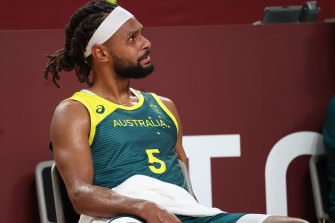 Hard to take … Patty Mills after the semi-final loss.Credit:Getty

“I’m thrilled with the victory, obviously, but you know when I looked him in the eyes, I felt badly because they do have great camaraderie and great history and culture as I said, and they wanted it just as badly as any of us, so that was a little bit sad,” Popovich said. “But that’s what we all do, we all try to win.”

The bronze medal match will be played at the Saitama Super Arena at 9pm (AEST) on Saturday night.