Tatiana Grigorieva is the Arthur Morris of the track, the Grant Hackett of athletics. Like those great athletes, her moment was overshadowed by the significance of history being made around her.

Morris was batting with Bradman when he played his last innings. Bradman famously made a duck that day; Morris less famously made 196. Hackett was a generational champion whose timing was such that he coincided with the greatness of Ian Thorpe.

Like Morris, Grigorieva had the perfect seat to witness history at the Sydney Olympics. She was in the middle of the track, preparing to jump to a silver medal in the pole vault, as all eyes followed Cathy Freeman in the 400 metres that night.

Best view in the house: Tatiana Grigorieva flies towards silver in the pole vault at the 2000 Games.Credit:Tim Clayton

Unlike Freeman, Grigorieva arrived at the Sydney Games as a virtual unknown. She emigrated from Russia in 1997 in the hope of making it as a 400m sprinter and hurdler. She fell into pole vault because the only coach she could work with in Australia who could speak Russian was pole vault coach Alex Parnov.

Emma George, who had set 12 world records in a row in the late 1990s and was the hope heading into the Sydney Games, where women's pole vault would be held for the first time, was the real focus.

With no profile, no one noticed when two months earlier at a small meet in Germany, Grigorieva missed the mat on landing and smashed her ankle. Her Olympics were in doubt.

"This is not widely known because it was not a success story, it was more of a struggle story," Grigorieva reflected.

But she would not to have to wait another four years. She pressed ahead, made the Games and got through to the final, which serendipitously coincided with the final of the women's 400m – Cathy's race.

The record crowd squeezed into Homebush Stadium were there to see Freeman and witness history but they were greedy for new heroes. Grigorieva's and Freeman's paths converged that night.

"It was an unbelievable experience, really, to compete in my own final, my own Olympic final was massive. Saying that I had a tunnel vision doesn't mean I wasn't aware Cathy was going to be performing, I was trying to stay emotionally disconnected from this fact, but I was very much aware that she is in the final. It was unavoidable I guess, everybody in Australia and around the world knew that," Grigorieva recalled.

"Did I know my jump was going to clash with her race? No I didn't, there was another five or six girls in the comp so the chances it was going to be my jump when she is racing is quite slim but unfortunately, or fortunately, [it happened] and I faced the decision whether I am watching her race, because I did have the best seat in the house. 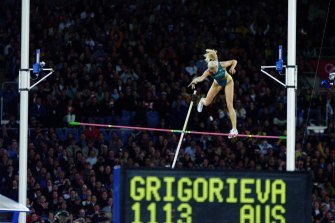 Grigorieva in action in the pole vault at the Games.Credit:Narelle Autio

"I was on the inside, the 300m mark of track on the inside. Do I maintain this super high level of focus of clear my bars and do my job? The temptation was too great. I couldn't resist it."

She sneaked a peak at Freeman.

"I knew my clock was ticking and I needed to start my run-up. I also knew Cathy was finishing her first 200 and was running right behind the pole vault mats, so for me just moving the eyesight from the bar and just little further out I would be able to see Cathy's run and that is what I did. I followed her from about 200 to 250, just enough so I didn't have to turn around and pivot at the start of a run-up.

"What an amazing experience; being an athlete I can appreciate the level of pressure and the expectation she had to deal with and being able to perform under all of these conditions is a massive effort so I have huge respect for Cathy. Wonderful human being, wonderful athlete as well.

"It's been really really cool to watch her biggest race probably in her lifetime as well while I am going through my biggest competition. It's a bit of a bonding experience."

Grigorieva had seen enough, she didn't turn her head and track the rest of the race, for the crowd told her what had happened.

"The roar, just the roar. An amazing roar. Again one of the sensations I took away from Sydney, and I wasn't able to experience anywhere else, was just the loudness of the spectators at the track.

"I don't know how to describe it but the vibration from the voices was just filling the spaces in the track and the air as feeling like water, just really thick and dense."

She could feel herself slipping. The noise was so great she was losing focus.

"At the beginning of the final competition I just went 'shhh' before the jump. I started to feel super overwhelmed with the noise and the support and the cheering. I started to feel the wave of energy taking me over, and I am not dealing very well with it.

"I had to figure out, 'how I can get back in control?' I am not an athlete who can jump on adrenalin … at some point I felt, 'I am losing the ground under my feet.'"

A strange thing happened. Grigorieva silenced 110,000 people. She called for quiet and the crowd obediently became pin-drop silent for that jump and then intuitively for every jump she then took. They were trying to help, not with their voices but with brief, respectful silence.

Very quickly the field trimmed to four, then suddenly it was down to just two. She hadn't had time to process the fact she might win a medal, when suddenly she was guaranteed silver.

THE GREATEST NIGHT OF ATHLETICS, EVER

Australians remember September 25, 2000 as the night Cathy Freeman won gold. The rest of the world remembers it as the greatest night of athletics ever.

Seb Coe, now head of world athletics, said after the Olympics it was the greatest night in track and field he had seen. He is not alone; it is popularly recognised as the best night ever, or at least the best night there had been to that point. Only at the London Olympics, when Jess Ennis, Mo Farah and Greg Rutherford won gold for Team GB in the space of 45 minutes comes close.

It was the biggest crowd ever to watch a night of athletics, when 110,000 spectators crammed into Homebush Stadium.

It was not just Freeman’s gold. Michael Johnson became the first male to win consecutive 400m gold medals, after victory in a race delayed for 15 minutes because of the pandemonium of Cathy’s victory.

It was the last individual race for one of the men who set world records in the 200m and 400m, won eight world titles and four Olympic golds.

At 33 years and 12 days old, Johnson had become the oldest Olympic gold medallist at any track event shorter than 5000m.

Then the women’s 5000m final pitted Ireland’s champion Sonia O’Sullivan – now a long-time Melbourne resident – who was world champion in 1995 against Romania’s Gabriela Szabo, winner of the 1997 and 1999 world titles. The Romanian won gold from O’Sullivan in silver.

The greatest distance runner of all time, Ethiopian Haile Gebrselassie, won the men’s 10,000 metres by 0.09 of a second over Kenyan Paul Tergat – the two men who went gold and silver four years earlier in Atlanta – after a desperate head to head race down the home straight.

It was athletics’ greatest night but one of its saddest days, as earlier that day a man sat at a press conference and emotionally insisted he could not explain why he had failed four drug tests.

He was world shotput champion CJ Hunter, the husband of champion Marion Jones, the sprinter who won three gold and two bronze medals in Sydney but would later be stripped of the medals as a drug cheat.

History was made in many ways that day.

It made her relax. This time she decided to urge the crowd to be loud. The final two were jumping not only for gold, but a world record. American Stacy Dragila held her out for gold.

"It was absolutely amazing," Grigorieva said. "I remember the sense of joy and sense of love, it was pouring out of me.

"I realised it was big but I didn't realise how big and how significant it was until a few weeks later when people were talking about this night being the best night of athletics ever in history.

"Cathy was the superstar of the night, the whole Games, and had done extremely well, but the fact I was able to add my two cents into it was really, really cool.

"For me I don't think I am overstating saying this event has changed my life."

Related posts:
Previous Post: The SEC is back! From Saban’s scowls to Orgeron’s ‘Geaux Tigaaahs,’ here’s what we can’t wait to watch
Next Post: Adebayo Akinfenwa: Fleetwood Town avoid punishment from FA over ‘dehumanising’ remark