A cabbage came in the mail. Ash Moloney opened the bag delivered to his door in hotel quarantine, and found a cabbage.

By now, he was not surprised. He had already received dog food, lubricant, colouring books and paints, as well as regular Uber Eats deliveries from people wanting to buy him lunch, dinner or coffee. He also got a big box of Lego.

“Yeah, I got some weird stuff. I got a cabbage, I don’t know why, all this weird stuff all in good humour. People want to do something for you and spend their money on you,” Moloney, the young decathlete who claimed a famous bronze medal at the Tokyo Olympics, says.

His fellow decathlete Cedric Dubler has been getting them too. The meals, the coffees, the drinks, the Lego. Suddenly, everyone wants to give the pair something, to give them some fraction of the joy they had given others.

Moloney’s was an Olympic medal that resonated with people. He is the boyish champion, who at 21 won bronze in the gruelling two-day 10-event decathlon, in which no Australian had ever won an Olympic medal before.

But as much people enjoyed the medal, the moment that resonated was that last emotional lap of his surging 1500m, when Dubler willed him onto the finish. Dubler, out of medal contention, just wanted to help Moloney, and paced him and screamed at him at the final bell.

“Go Ash. Go. Go. Fucking go!” He screamed himself to a standstill and watched as Moloney sped to the finish line and a bronze medal.

At that moment, Dubler was every Australian. It embodied our better selves and what we would like to think we are: the one who is there for his mate. They made for great images, and created a new slang phrase: “Doing a Dubler” for helping a mate.

Some on social media have suggested that Moloney wouldn’t have won the medal without Dubler. That is, like much instant expert Twitter commentary, overblown.

Moloney won a medal because of his performances, dominating eight of the 10 decathlon events. He was in second place for most of the two days and slipped to third when the world record holder threw a javelin out of sight. All he needed in that last event was to be no more than nine or 10 seconds behind the man who was sitting in fourth place, and he would make sure of his bronze medal. 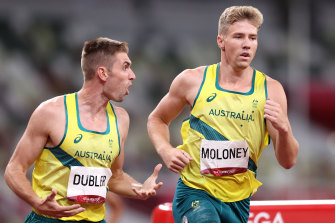 Cedric Dubler giving Ash Moloney the encouragement he needed in the last event of the decathlon.Credit:Getty Images

Dubler added the emotional connection. Dubler committed to helping him if he could, pacing him in that last race. His emotional screaming definitely helped, but the running was down to Moloney. He couldn’t let American Garrett Scantling beat him by more than 10 seconds or the American would take bronze. Moloney did it easy – he finished only four seconds behind Scantling.

Dubler is the first to press this point.

“I am not taking any credit for the result. He was the one that had to do it all and the training in the lead-up but for me it was super exciting to be there and support him in the lead up and to help him to an incredible result,” Dubler said.

Dubler’s achievement was just finishing the decathlon. He tore a hamstring two weeks before the Olympics and doubted he would get to the start line let alone the finish line.

He hopes to one day finally get to a major world meet fit and in shape. It hasn’t happened yet at a world championship or Olympics he has competed at yet. He dreams of being on the dais with Moloney, who he has no doubt will soon dominate the event.

“There is definitely a lot more to come for Ash. I honestly think it will come down to the support he gets. If he gets the support he needs to be a full-time athlete and have the right team around him, he will break a world record. It’s as simple as that. He is really that good.”

Moloney still pinches himself about what he did. He couldn’t believe he was even competing against world record holder Kevin Meyer, the man who leapfrogged him into the silver medal, let alone share the dais with him and gold medallist Damian Warner.

“Competing against Meyer was so cool. I was a little star-struck to be honest. Everyone there is an incredible athlete and it is so weird to just go up and say, ‘Hey man, how’s it going?’ It’s like seeing Britney Spears walking down Queen Street and going, ‘Hey?’ And having them look at you like, ‘hey I know you’,” Moloney said. 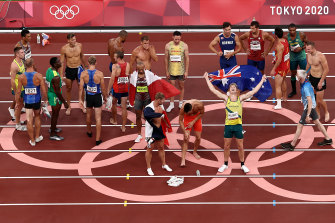 Moloney reacts after claiming a historic decathlon bronze for Australia in Tokyo.Credit:Getty

“And then to be on the dais with them. I was like I am with the world’s No.1 and Damian is No.2 or three in the best ever decathletes. It is just ridiculous. I am up here with these two incredible athletes, the best of our time.”

Moloney won’t forecast where he could get to, but decathletes say that from 21 you add about 500- 1000 points a year into your mid to late 20s when you peak. Even a modest rate of improvement could see him break the world record.

In Tokyo, he set personal bests in the 100m, high jump, 110m hurdles and the 1500m. Sally Pearson, the Olympic gold medallist and world champion, worked with Moloney before Tokyo.

“Sally helped me a lot leading into Tokyo. She gave me tips that helped but they ended up making me so much faster I didn’t have time to control it, so I have a lot of work to do,” he laughed.

“I stumbled on a hurdle. I came in too fast and didn’t know how to control it. That is an experience and technique thing.

“I was happy with day one it went really well. Day two is the day as a whole I need to work on. My Achilles heel would have to be hurdles, pole vault and my javelin. Those three events I am losing a ridiculous amount of points where all I need to do is fix my technique and I will make up massive points.”

Decathlon is so physically taxing it is like the marathon or an Iron Man. Athletes can only do a few a year.

Next year he plans to compete at the world indoor titles in Serbia in March, the world championships in Oregon from July 15-24, and then the Commonwealth Games in Birmingham, which start on July 28.

It’s a taxing program so for now, he gets time to rest. And to wonder what to do with a cabbage.