Hana Basic might never have stepped foot in the country, let alone run for Australia.

Basic might have been many things: Bosnian, gymnast, Australian sprinter, anonymous backpacker. The daughter of immigrants who fled the former Yugoslavia during the war, she was a gymnast before she was a runner, and she could do flips before she could speak English. She was a tourist before she was a serious athlete.

Hana Basic is getting close to the national 100 metres record.Credit:Eddie Jim

Now she is poised to be an Olympic sprinter and is closing fast on becoming the fastest Australian woman ever.

Basic feels the debt of the immigrant child. It’s not a burden; on the contrary, it gives her a lightness, but you can see it in her eyes and the shift in expression when she talks of her parents.

Her parents Armin and Zana Basic were young lovers in Bosnia at the time of the war in the early ’90s. Armin had done two years of military service and was poised to be called up to fight in the war. 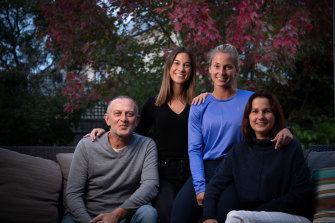 The couple knew they had to get out of Bosnia. Armin reached out to a distant relative in Australia and discovered they couple could both be accepted here (at a time when Australia looked more benevolently upon refugees) if they were married.

Zana, a young lawyer, was from Mostar while Armin, who was running a cafe, was from Banja Luka but a border separated them at the time. If they tried to cross to be together and marry Armin would be grabbed to go to war.

“My mum’s cousin had to pretend to be my dad and marry Mum. They didn’t actually have a wedding, he just signed papers pretending to be my dad and then within a few days they were able to get out of there from Zenica,” Basic said.

The couple arrived in Australia unable to speak English, found factory work and started a family. Basic’s older sister Mia came in 1994, then Hana in 1996.

“They saved enough money and brought my grandparents over. My sister Mia was a very sick child, she was born very premature, so I basically grew up with my grandparents. So Bosnian was my first language, I learned English when I went to primary school,” Basic said.

“My grandparents moved back there, in 2014. That’s their home country, they never learnt English, their friends, their sisters and brothers are still there.”

Zana’s legal degree was not recognised without equivalence studies so she found work and promotion in other fields. Armin now runs a number of factories for a packaging company.

Mia is now the lawyer of the family. Basic is a sprinter.

At the age of four Mia and her sister were both enrolled in gymnastics. Mia didn’t last long but by the time Hana was a teenager she had two state titles and was going yearly to nationals.

“My parents were very supportive, not pushy. It wasn’t like a Jelena Dokic parent thing. They were supportive of me all the way. Gymnastics is just very big in Bosnia so they wanted to do that first and I thank them every day that I did gymnastics, it is the mother of all sports,” Basic said.

“I built my strength, flexibility, balance, power, co-ordination everything. It has made me such a better athlete and sprinter now because I did that then.”

But she grew, and outgrew, gymnastics. Athletics was calling.

She was a good sprinter, good enough to go to world juniors for Australia in 2014. She ran 11.64 seconds seven years ago and appeared on the threshold of truly breaking through at the top level. 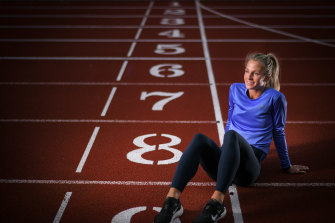 For a while running was important for Hana, just not that important.Credit:Eddie Jim

Then she plateaued. She trained but not hard enough. She ran but not quickly enough. She raced but she also travelled. Each year after school she would head to Europe with girlfriends for six-week backpacking holidays and to see her grandparents in Bosnia.

Running was important, just not that important. For six years she struggled break 12 seconds again.

“I was a little bit lost or didn’t know what I wanted to do or be. I had no direction, I was just going with the wind. I just trained because I enjoyed training and didn’t know my life without training but I really had no goals,” she said.

″⁣I knew if I put in the work I would be up there but I wasn’t putting in the work. I was working, going out with friends, going to restaurants, doing all the normal 21-, 22-year-old things.”

COVID-19 changed all that.

She had changed her sprint coach to change things up in her life and when COVID-19 hit, lockdown brought with it an opportunity to introduce a new discipline. She changed her diet, her training and in a short time changed her body shape.

”I know when I am training well and every session just felt f—ing awesome and I felt like, right, I need to keep pushing towards this, and I dropped weight and my body started to change and I started to look like a proper athlete, which I hadn’t for ages.

“I couldn’t see my coach but I was sending him videos of all my sessions and he was so pleased.”

She didn’t train on a track; she would go to nearby Elgar Park in Box Hill and train with her boyfriend.

She worked on her body and her mind. Before COVID-19 she would stand at the blocks and look at her competitors and know where she would finish before the race began.

“I knew physically I was not there so mentally I pigeon-holed myself,” she said.

After COVID-19, once she began to look like an elite athlete and not just a very fit person, she stood on the blocks and thought: “I’ll win.”

Then she dropped to 11.45, then 11.37 running into a headwind at Albert Park. She went next to Canberra on a track with puddles down the straight and still ran 11.25.

The change in her couldn’t be ignored any more; she was backing it up and running fast it in all conditions. Next race she ran 11.18. The Olympic qualifier is 11.15 and Melissa Breen’s national record is 11.11. Both are within touching distance.

There are national titles this weekend in Sydney, then five competitions in Queensland with more chances to hit the qualifying mark.

“When I think of what Mum and Dad did it would mean everything to me if I got the record or to Tokyo,” she said, tears filling her eyes.