Ash Moloney has gone where no Australian has gone before, winning bronze in the decathlon, Australia’s first medal of any colour in this event and at the the track at these Olympics.

After eight gruelling events, Moloney, the young star at his first Olympics, had been in second place. After the ninth event, javelin, he was third. It all came down to the last race, the 1500 metres, on Thursday night. Could he hold on?

Ash Moloney is encouraged by teammate Cedric Dubler in the last event of the decathlon.Credit:Getty Images

This was the equation: going into the 1500, Kevin Mayer was in second, 102 points ahead of Moloney, and a ridiculously good 1500-metre runner. He was realistically unreachable for Moloney to recover the points he needed to take silver.

Moloney had to hold off the man in fourth, Garrett Scantling from the US, and fifth, Pierce LePage from Canada, from pushing him out of the medals. He needed either to beat them or not run slower than nine seconds behind either of them in the 1500.

When the bell went for the last lap of the last event of 10, Moloney looked like he had nothing left. Before the bell, his mentor and teammate Cedric Dubler, who had paced in him in the race, screamed at him to go and sat on his backside to chase him for 100 metres. It turns out decathlon is a team sport after all.

Moloney lifted a gear. He got home in time. He claimed bronze with 8649 points, from Scantling with 8611. 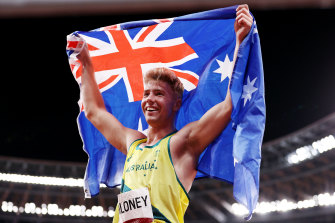 Moloney was the little known star in the little known sport. He’s a decathlete, which is why you haven’t heard of him before, but you will now. Moloney has announced himself as a genuine superstar of athletics’ most gruelling event.

Australia had never won a decathlon medal before. Never even got close in 70 years. Petter Mullins in 1948 in war-ravaged London was our closest effort; he finished sixth.

Moloney at 21 has bettered every other Australian before him. He was beaten into second by the man whose career trajectory he has followed, Mayer, the French former world champion who like Moloney won gold at the world juniors and went on to be world champion.

Moloney was beaten by Mayer, and by 10 years strength and experience. Imperiously out in front was Canada’s Damian Warner, who led from the first morning when he won the opening 100-metre sprint of the brutal, two-day competition. 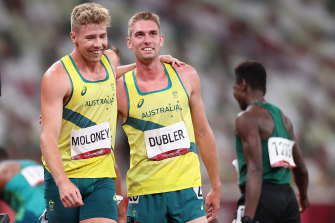 Dubler and Moloney celebrate together after the 1500.Credit:Getty Images

Moloney was in second place at the start of day two and the second half of the decathlon card.

His time of 14.08 seconds for the 110-metre hurdles to start Thursday was the best he had ever run, the fourth quickest of the morning and let him hold his ground in second place.