Sifan Hassan’s degree of difficulty at these Olympics was already higher than any other athlete’s.

The Dutch distance runner is aiming to make history as the first person to win gold in the 1500m, 5000m and 10,000m at one Games. She is a good chance to do it – a favourite in each race.

Her schedule was so punishing that on Monday she had to run a 1500m heat in the morning and the 5000m final in the evening. And that was before she fell over.

Sifan Hassan trips and falls during her 1500m heatCredit:Getty Images

At the bell for the final lap of the 1500 Hassan was coasting at the rear of the pack, saving herself. Then the runner in front of her tripped and fell and Hassan hit the ground.

When she got up again she was in last position, 30 metres from the back of the pack, disappearing around the bend.

Her back straight was hilarious, Hassan looking like a parent trying to catch up to her kids.

She won’t have been banking on having to run the heat as hard as that.

Hull, by contrast, expected to run hard, knowing Hassan was in her heat. Hull and fellow Australian Linden Hall both progressed after aggressive, confident runs. Hall was strong in a faster heat, finishing third in 4:02:22.

“I just wanted to have a good clean run I know how messy the 1500 can be,” Hull said with understatement, given what had happened to Hassan.

Hull, like Hassan, was also qualified to run the 5000m but opted against it given the timing of the races.

“You want to do one and do it well, for me at this point of my career the 1500 was the where I was more confident, I have raced it the most times and I know how to run the tactics a bit better,” she said.

In an extraordinary scene in the women’s 200m heats, a brain fade seemed to cost Jamaican Shericka Jackson a place in the semi-final. 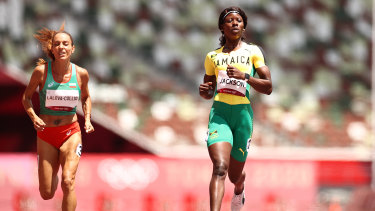 Shericka Jackson eased up before the line in her 200m heatCredit:Getty Images

One of the favourites for the race after winning bronze in the 100m on Saturday night, Jackson looked to take her heat easily, going at a manageable pace throughout, then slowing as she neared the line, only to find the Italian Dalia Kaddari had shaded her into fourth.

Only the top three in each heat and the next six fastest times go through to the semi-finals.

Jackson finished fourth in 23.26, 0.004 seconds behind Kaddari. Her time was well outside the best six to be able to get through on times.

Shelly-Ann Fraser-Pryce recovered from missing gold by a whisker in the 100m on Saturday night to coast to a win in her 200m heat.

Australian Riley Day finished third in her heat in 22.94 seconds and to go through to Monday night’s semi-finals. 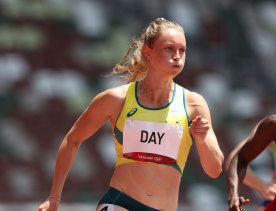