Claudia Hollingsworth faced a choice between her two great loves. There was no bad option, but there was no easy one either.

An excellent schoolgirl footballer, she is also an elite runner. So, what was she to do? Footy or the track?

The now 17-year-old was playing last year for her club, the East Brighton Vampires, and at the Sandringham Dragons. She had designs on being drafted to the AFLW when she came of age.

But she’s also no ordinary athlete. An 800-metre runner, she was a national junior star and had designs on the Australian team for the under-20 world juniors.

She chose the track and, so, for the first time, she hasn’t played footy this year.

She will fly in, compete, get back on a plane, and fly straight to Miami for a team camp before heading to Cali, Colombia, for the world junior championships. Then back to school at Mentone Grammar for term three of year 11. Life is a whirlwind.

“I am so excited, it is such a shock,” said Claudia (pronounced Cloud-ia; she will cut you a look with a don’t-say-it-that-way-again sweet smile if you pronounce it Claw-dia).

“My goal has been world juniors so to get on the team for the world championships is just amazing. I didn’t think it would happen.

“I turned down the footy this year because I wanted to focus on getting to world juniors. That was really hard not playing footy this year. I love the team sport side of things. It was hard to make the decision. I must be honest.”

Hollingsworth is coached by four-time Olympian and former world 5000m bronze medallist Craig Mottram. He was open to her continuing to play both sports and didn’t push her to drop footy.

“I am not so much worried about [knee injuries in footy], I am more worried about early specialisation. So I go the other way on it,” Mottram said.

“I’d rather her do other sports and keep participating in other things. She swims, does triathlons, is obviously good at footy. So for someone of this age you want to make sure they still want to do the sport in a few years. So, as good as they may be, if they fall out of love with it, what is the point? 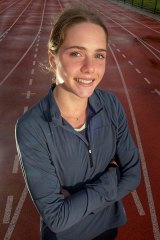 “From my point of view, she is in year 11 – she has another year left of school. If, at the end of year 12, the running is what she wants to do, then I have done a great job. She may choose footy and that is fine to but at this point she is good with running.

“I think running has got her now, she is all over it, she loves it, and she is very, very good at it.”

The world championships have been a surprise and a little extra benefit, but the world juniors remain her focus.

“Claudia is still 17, so making the world championship team is for experience – she has earned her spot and she will run her best and she will do really well. But the world under-20s is what we have been focusing on for the majority of the year. That’s who she is going to be with in the sport for the next 15 years, so that’s really important for her to feel comfortable and that she belongs in that group. This is a bonus. And I think she will surprise a few people.”

She hasn’t completely shut the door to footy. She will be packing a Sherrin for a kick when she gets to America and Colombia.