Qatar’s Mutaz Essa Barshim added a coveted Olympic gold to his list of accolades in the men’s high jump in Tokyo on Sunday, but he had to share the medal with Gianmarco Tamberi of Italy after both men ended with jumps of 2.37 metres.

Brandon Starc narrowly missed out on an Olympic medal but, mercifully, avoided becoming Australia’s second track and field athlete to finish in the dreaded fourth place thanks to the quirks of a countback.

Both Barshim, 30, and the 29-year-old Tamberi did not have a failed attempt until they attempted to clear the 2.39 mark.

After three failures each at 2.39, they ended up tied and entered a conversation with an Olympic official, who first offered them a “jump-off” to decide the matter.

“Can we have two golds?“, Barshim asked him.

The official nodded, and the two athletes clasped hands and whooped for joy. 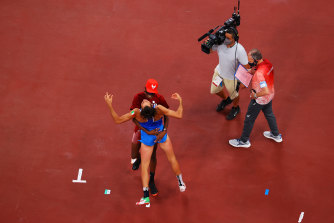 Mutaz Essa Barshim of Qatar (top) and Italy’s Gianmarco Tamberi embrace after their decision to share gold in the high jump on Sunday.Credit:Getty

Maksim Nedasekau of Belarus also cleared the 2.37 mark but he had more failed attempts, resulting in him taking the bronze medal.

Competing at his second Olympics, Starc cleared 2.35 metres, just one centimetre shy of his personal best height and shared national record, and the best height recorded by an Australian at an Olympic Games.

The 27-year-old with the familiar sporting surname and trailer park moustache clipped the bar with his shoulders on his first attempt at 2.37 metres and decided to pass and go straight to an attempt for 2.39 metres, an Olympic record that had stood for 25 years. He completely mistimed his first attempt there and crashed out on his second attempt – his third straight missed jump.

The class jumper in the field was Barshim, a two-time world champion who, after clinching his most recent title in his home city of Doha, was personally congratulated by Sheik Joaan bin Hamad al Thani, a billionaire politician who also happens to be president of Qatar’s Olympic Committee.

At the time, Doha was one of Brisbane’s rivals to host the 2032 Olympic Games.

Starc cleared the opening three heights comfortably along with all competitors but the local jumper, Nato Toba, who gave a wave to the largely empty stands after missing at 2.27 metres.

At 2.30 metres, he produced one of his cleanest jumps for the night.

Starc had jumped 2.33 metres at three Diamond League events over the European summer and approached the bar with his characteristic speed. But on his first attempt, his campaign to become Australia’s first track and field medallist of these Games hit a wobble, with the first cross against his came.

On the next attempt, he clipped the bar with his heels and slapped the mat in frustration. He wasn’t the only jumper in the field to struggle with at the height – New Zealander Hamish Kerr, Canada’s Djang Lovett and Ilya Ivanyuk of the ROC all bowed out of the competition at that mark – but the 27-year-old from Sydney, an experienced competitor at his second Olympic Games, knew he was too good to join them.

On this third attempt, Starc left the bar undisturbed and gave a little wave of relief. He had equalled his season’s best and was through to the business end of the competition, but he knew the misses could prove costly later in the game.

As it happened it meant he didn’t share the bittersweet fate of discus thrower Matthew Denny, who missed out on a medal by just five centimetres – less than the width of a beer can, as he put it – the previous night.

At 2.35 metres, Starc cleared his best height of the season on the first attempt and joined Barshim and three other jumpers in the business end of the competition.

Invariably introduced as the brother of Australian fast bowler Mitchell Starc, Brandon is developing an impressive sporting CV of his own, with a Youth Olympics silver medal and Commonwealth Games gold to his name.

He has previously spoken of his pride of competing in Australian colours, albeit in relative anonymity compared to his more celebrated sibling.

“They might not know who you are, but they’re cheering for you and that’s a really great feeling,” he told World Athletics.

These Games won’t change that for Starc, who is a good chance to keep jumping towards Paris.