If the spirit of the Olympics counts for anything, and if Australia is as big-hearted as it imagines itself to be, one of the ceremonies of this 20th anniversary celebration of the Sydney Games should be an apology to Marie-Jose Perec.

You remember her. She was the elegant French runner from Guadeloupe who had won the 400 metres at the previous two Olympic Games, beating our Cathy into second in Atlanta, and stood as the only likely spoilsport of a glorious script that had already been written and needed only to be signed off in the actual race.

Marie Jose-Perec was in the spotlight from the moment she touched down in SydneyCredit:Brendan Esposito

Perec stayed in a city hotel, not in the athlete's village, gave no interviews and then mysteriously decamped from the Games before running even a heat, materialising briefly in a scuffle between her boyfriend and a cameraman at Changi airport in Singapore and then back in France, never to run again.

She said media and public harassment, including a face-to-face threat from someone who knocked on her hotel room door, had made it impossible for her to train and run in a fit state of mind in Sydney. On the day she arrived, media chased her through Sydney airport like a fugitive property developer.

"The 400m in Sydney was not a race against Cathy Freeman, it was a race against an entire nation which had its problems," Perec said later. "I was only prepared for a 400m." 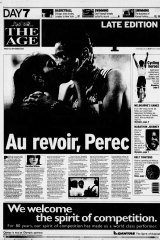 The Age’s coverage of Perec’s departure during the Sydney OlympicsCredit:The Age

You don't have to imagine how her desertion went down. It is all there in the thick piles of clippings. "Petulant". "Temperamental". "French missy". "Precious mademoiselle". "Scared". "Seriously disturbed". "Fantasist". "Sadly deluded". "Brittle". "Disgraced". That was a couple of days worth of print media, let alone other forms. It was the worst of Australia in the middle of the best of Australia.

Worse, she was a part-time model, still worse was reclusive, and worse yet again, she "had an ego". Mon Dieu, has there ever been such a monster in the world of sport?

But the Daily Telegraph again demonstrated that however low anyone else went, they could undercut them. "Mademoiselle La Chicken," trumpeted its front page.

Perec in that moment served a two-in-one need in Australia's sports psyche. One is for an anti-hero. It is not enough for our heroes to win the day, they must also have triumphed over evil and darkness along the way, so that their halo shines ever brighter. Something of the mindset comes through in Freeman the doco, conveyed by sportswriter Scott Gullan, ghost of Freeman's autobiography. "She was enemy No.1," he said. "That was the sentiment: we did not want her to win."

By abandoning ship, Perec made sure of it, and so met the other requirement of her, to get out of the way. It meant she could be safely jeered and mocked all the way back to wherever she came from while Freeman ran in unassailable glory. It is as well that social media was not a thing then.

Perec may have been a difficult person, to use the usual euphemistic formulation, but that hardly made her unique in the highly-strung world of international sport. She had her ups and downs with HSI, her aths club-cum-agency. She had a tempestuous relationship with the French media, who were as scathing of her in this episode as the Australian media.

She was remote by choice. She said self-containment has been a key to her gold medals in Barcelona and Atlanta, where she was left alone. She gave an interview about a month before coming to Australia, and said she would give no other.

Above and beyond, she was a magnificent athlete. Freeman looked up to her. She says so in the doco: "I ran towards her". In Atlanta, they were first and second in times neither would ever run again. In the athletic sense, it was a far greater race than Sydney. The idea that Perec was mentally brittle was absurd.

But between Atlanta and Sydney, much had changed. Freeman had lost only one of 40 races. Perec, five years older, had succumbed to injury and illness – Guillain-Barre syndrome – and barely competed. She had little left to give and nothing left to prove as a runner, but came to Sydney to try anyway. When it became clear to her that she was neither mentally nor physically up to it, was she meant to offer herself up as some kind of sacrificial gift to Australia? Hardly.

There were failings on both sides, but it is inescapable that Australia's famously hospitable welcome to the world was not extended to the one woman who might have ruined everything. In that context, Perec is owed not merely forgiveness, but an apology. A truly big country would make it. Who knows how Perec would receive it, and it is not the point anyway. About any apology, the spirit in it is offered is more important than the grace in which it is received. Do we have that magnanimity in us?